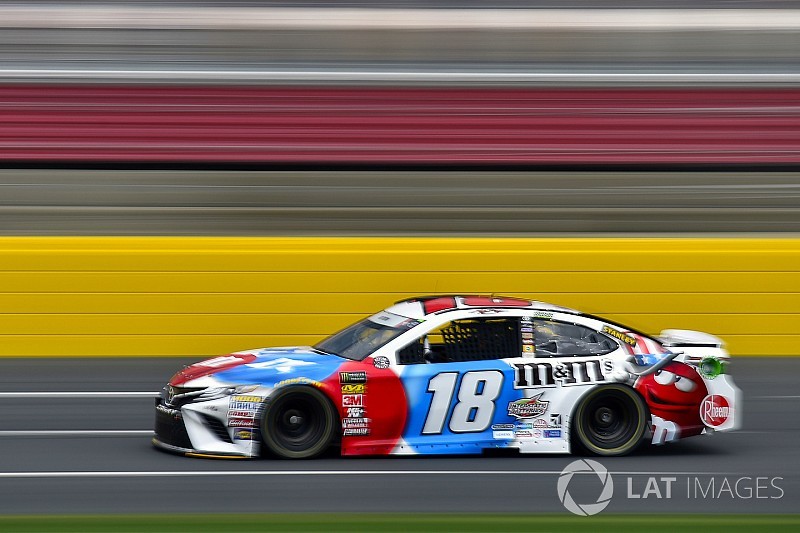 Kyle Busch made it three-for-three as he claimed the Stage 3 victory in Sunday night’s Coca-Cola 600 at Charlotte Motor Speedway.

While the 100-lap segment was interrupted several times by cautions, Busch still remained virtually untouched and earn the win by more than two seconds over Erik Jones.

During the break between Stages 2 and 3, all of the lead-lap cars elected to pit for tires and fuel with Busch again first off pit road. During the stops, Truex was penalized for speeding on pit road and had to restart at the rear of the field.

When Stage 3 went green on Lap 208, Busch led the way followed by Hamlin and Clint Bowyer.

On Lap 216, Chase Elliott powered his way into the top-five for the first time in the race, clearing Bowyer for the position.

Bowyer quickly dropped to sixth. “I’m just holding on,” he said over his team radio.

Gray Gaulding spun on the frontstretch to bring out a caution on Lap 227. During the pit stops, Truex received his second pit road penalty of the race, this time for an uncontrolled tire.

Busch led the way on the restart on Lap 231, followed by Hamlin and Almirola.

Kyle Larson powered into the runner-up position shortly after the restart as Hamlin dropped to third.

With 50 to go in Stage 3, Busch maintained about a 2-second lead over Larson. They were followed by Hamlin, Almirola and Elliott.

Chris Buescher got into the Turn 4 wall, doing heavy damage to the right-side of his No. 37 Chevrolet, which brought out a caution on Lap 259.

All of the lead-lap cars pit for tires and fuel with Busch again the first off pit road. He stayed in the lead on the restart on Lap 265 followed by Hamlin, Larson, McMurray and Elliott.

McMurray went from fourth to the runner-up position on the restart as Hamlin dropped to third.

Another caution was displayed on Lap 274 after Larson spun and made slight contact off the Turn 2 wall. “I’m sorry, I can’t do anything, the rear just wheel hops like it has all year,” Larson said over his team radio.

Most of the lead-lap car remained on the track as Busch continued to lead on the restart on Lap 278, followed by McMurray, Hamlin, Kurt Busch and Almirola.

On the restart, Ryan Blaney’s No. 12 looked like it just blew up as it erupted in flames as he quickly pulled it off the track in Turn 2 and race went back under caution.

Kyle Busch held the lead on the restart with 15 laps remaining in the stage.

Jones quickly moved into the runner-up position shortly after the restart as Kurt Busch dropped into third.