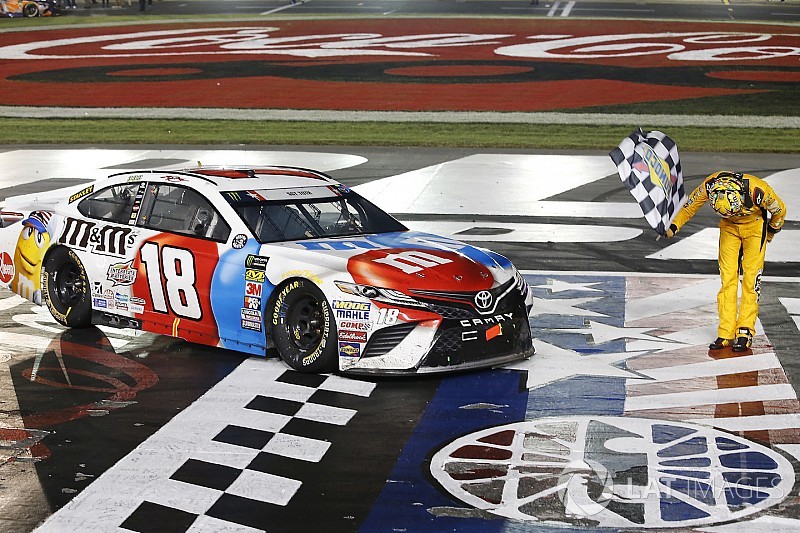 Charlotte remained the only current track on the schedule on which Busch had never earned a points-paying series victory but filled in that line on his racing resume in dominant fashion Sunday night.

"This one's very very special," Busch said in Victory Lane. "It's hard to top Homestead and the meaning of what winning the championship is but the Coke 600, I've dreamed of this race since I was a kid and being able to win this race.

"I was always watching the All-Star Race and the 600 the following weekend and then to be to come out here and now win the Coca-Cola 600, it's phenomenal. It's a little boy's race come true.

"I want to thank NASCAR for giving me the chance to come out here and have this opportunity to race for my dreams and to accomplish all those things."

Busch led all but 23 of 400 laps en route to a lopsided win in the Coca-Cola 600, his fourth series victory of the season.

The win is the 47th of Busch’s career. His only previous Cup win at Charlotte was a victory in last year’s All-Star Race.

During the break between Stages 3 and 4, all of the lead-lap cars pit for fuel and tires and once again Kyle Busch was the first driver off pit road followed by Keselowski and Kurt Busch.

Stenhouse was penalized for an uncontrolled tire during his pit stop and had to restart at the rear of the field.

The race returned to green with 93 laps remaining.

Three laps after the start, Kyle Busch had moved out to more than a second lead over Keselowski.

With 88 laps to go, Ryan Newman pulled down pit road and headed directly to the garage with a mechanical issue. He was running fifth at the time.

With 70 laps remaining in the race, Busch held more than a 3.5-second lead over Truex as Keselowski dropped to third.

A final round of green-flag pit stops began with 56 laps to go. With 48 to go, Kyle Busch missed the entry to pit road while attempting to make his stop but continued on and completed his stop on the following lap.

Even with the miscue, Busch still held the lead when the cycle of stops were completed on Lap 355. He was followed by Keselowski, who was now 3.8 seconds behind him.

Erik Jones had an uncontrolled tire penalty during his stop and had to make a pass-thru on pit road.

With 40 laps to go, it was Kyle Busch, Keselowski, Johnson, McMurray and Truex.

On Lap 387, Truex made his way into the runner-up position as Keselowski dropped back to third.

With 20 to go, Busch held a more than 5-second lead over Truex with Hamlin even further back in third.

With five to go, Busch still lead by nearly four seconds over Truex.