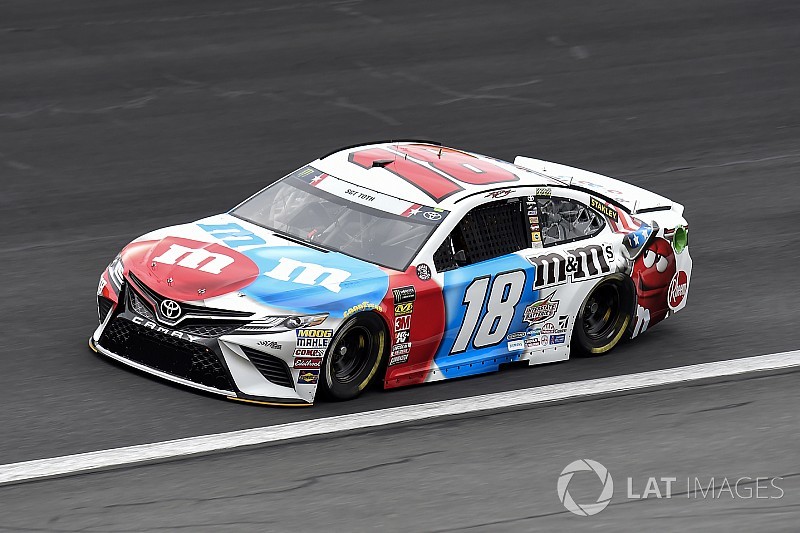 "Adam (Stevens, crew chief) and all these M&M's boys have done a great job," Busch said over his radio. "We've just got to stay on top of it here, and give Adam good feedback and make sure we're good to go for that final sprint to the finish."

During the break between Stages 1 and 2, all of the lead-lap cars pit for tires and fuel but Busch once again was the first off pit road and continued to lead when Stage 2 went green on Lap 108.

He was followed by Ryan Blaney, Hamlin, Truex and Almirola.

On Lap 114, rookie William Byron got into the wall off Turn 4 which brought out a caution. “It just took off on me,” Byron said over his team radio.

Several of the lead-lap cars remained on the track but several also pit to mix up strategies. Busch led the way on the restart on Lap 120 followed by Blaney and Truex. Jones was the first car with new tires and lined up 13th.

Shortly after the restart, Denny Hamlin got into Jimmie Johnson entering Turn 3 which triggered an incident that also collected Joey Logano and Erik Jones. All four of the drivers pit for repairs.

The race returned to green on Lap 124 with Busch in the lead followed by Larson and Blaney.

On Lap 135, Truex moved into the runner-up position behind Busch as Larson dropped to third.

On Lap 143, Byron was forced to pit again when smoke began billowing from his No. 24 Chevrolet. Byron’s team pulled the car into the garage on Lap 149. He retired from the race soon after.

“We just were really loose and just trying to make the top work. I just got loose, the car came around and hit the wall and then we had a bunch of damage,” Byron said of his race. “It started rubbing on the tire and then it wasn’t rubbing on the tire, it was cleared.”

“It just felt like something broke going into (Turn) 3 and we just hit the wall again and then we had an electrical issue. Unfortunate, but we will go to Pocono and figure it out there.”

With 50 laps remaining in the stage, Busch maintained a nearly 4-second lead over Truex.

A round of green-flag pit stops began on Lap 157 with teams trying to split the stage on fuel. Once the cycle was completed, Busch returned to the lead on Lap 174.

With 25 laps remaining in the second stage, Busch stayed out front followed by Logano and Truex.

One lap later, Truex moved into the runner-up position.

With 10 laps remaining in the stage, Busch was followed by Truex, Larson, Hamlin and Bowyer.