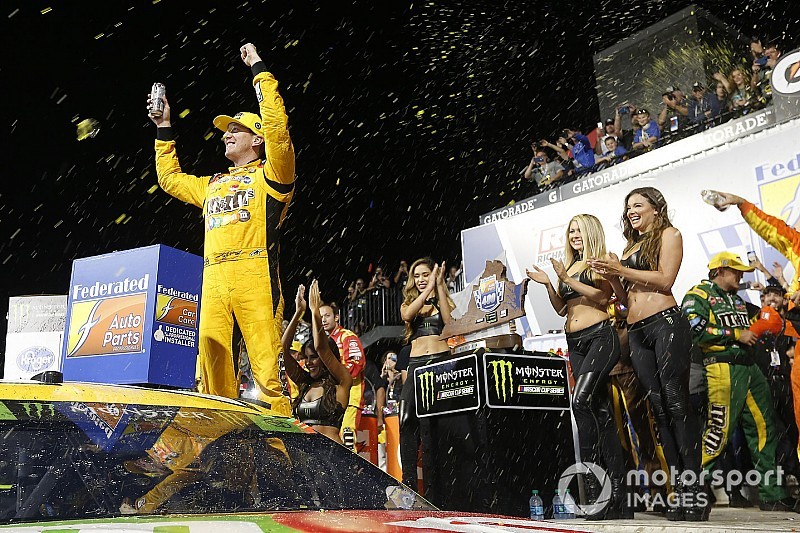 Once again, Kyle Busch won at Richmond (Va.) Raceway the hard way – going from the back of the field to the front.

Busch completed a season sweep of the Monster Energy NASCAR Cup Series races at Richmond, starting from the rear of the field, charging to the front and holding off Kevin Harvick to win Saturday night’s Federated Auto Parts 400.

Busch started 32nd in the spring Richmond race and went on to victory.

The win is Busch’s seventh of the season, tying Harvick for most in the series. It is also the 50th of his career.

More importantly, the win advances Busch to the second round of the playoffs regardless of his performance next weekend on the Roval course at Charlotte Motor Speedway.

"Yeah that was a little too close for my comfort. I thought we were a little bit better than that on the long runs," Busch said. "I know Harvick, that is kind of his specialty. We had a really, really good race car tonight.

"The guys did a great job coming back from a dismal qualifying effort and preparing a really, really good race car for us tonight. We started dead last, came up through the field and win this thing - that's right Rowdy Nation. All for you, baby!

"I just wanted to win this thing. It was a whole team effort. I put us a little bit behind yesterday in qualifying and the guys did a great job rallying to put it together. It was awesome race track. Love coming here. Hey - I finally won a fall race at Richmond, what do you know?"

Following the break between Stages 2 and 3, Elliott was first off pit road and took over the race lead when the final stage went green on Lap 210. He was followed by Harvick, Almirola and Keselowski.

Truex had to restart from the rear of the field after his No. 78 team was assessed an uncontrolled tire penalty during his pit stop.

On Lap 214, Keselowski got around Elliott to move into the lead for the first time during the race.

On Lap 245, Elliot patiently waited and reclaimed the lead from Keselowski as Harvick ran third, Almirola and Kyle Busch.

With 150 laps left in the race, Elliott held a small advantage over Keselowski and Harvick had closed to under a second from the leader.

Once the cycle of stops was completed on Lap 272, Keselowski had moved back into the lead. He was followed by Kyle Busch, Harvick and Elliott.

On Lap 287, Kyle Busch got around Keselowski off Turn 4 to take the lead for the first time in the race after starting from the rear of the field.

With 105 laps remaining in the race, Kyle Busch had moved out to more than a one-second lead over Keselowski. Harvick was third, Elliott fourth and Almirola was running fifth.

Kyle Busch moved out to a 3-second lead over Keselowski with 90 laps still to go in the race. Harvick remained in the third, but almost five seconds behind the leader.

Kurt Busch was the first to make a final green-flag pit stop on Lap 317. On Lap 319, Harvick made his way around Keselowski and into the second position.

Jeffrey Earnhardt spun off Turn 2 after contact with Matt Kenseth on Lap 326 to bring out a caution, which was put those who had recently pit in trouble.

All of the lead-lap cars pit for fuel and tires with Kyle Busch coming off pit road first and retaining the lead on the restart on Lap 334. He was followed by Harvick, Keselowski, Elliott and Almirola.

With 57 laps to go, Keselowski went to the outside and around Kyle Busch to reclaim the lead as Harvick remained close behind in third.

Kyle Busch got back alongside Keselowski with 40 laps left but couldn’t clear Keselowski for the lead. Harvick stayed in third, ready to pounce if those two made a mistake.

Busch finally cleared Keselowski to retake the lead with 37 laps to go.

With 29 laps left, Harvick moved into the second position, about 1.6 seconds behind Busch.

With 15 laps remaining in the race, Kyle Busch held a more than a second lead over Harvick while Truex had moved back up to third.

Harvick: "I needed about 25 more laps" to pass Kyle Busch