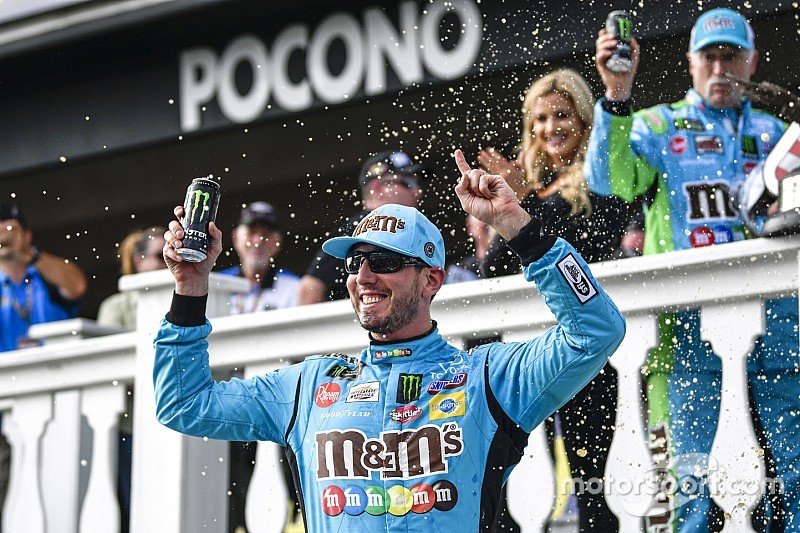 Busch bolted to a big lead on a restart with nine of 160 laps remaining and held off Brad Keselowski to win Sunday’s Pocono 400 at Pocono Raceway.

The win is Busch’s fourth of the season – the most of any driver in the Cup Series – and 55th of his career.

"I passed one guy on the outside of Turn 3 (Clint Bowyer) and that was the only guy I needed to pass, I guess," Busch said after the race. "It was hard otherwise. We kind of got stuck back in traffic a little bit earlier in the race, like in fifth or sixth and couldn't really do anything.

"Overall, my guys on pit road were awesome and picked up some spots there. Adam Stevens (crew chief) and some of his race calls got us up closer to the front. Cool to get a win at Pocono again.

"Having some M&M Camrys that are fast like this makes my job a hell of a lot easier."

Busch added later in Victory Lane, "We've had an amazing roll this year here so far. We've been really doing well, and we feel like we've kind of given away a couple of wins that we thought we had a shot for, but overall, it's awesome to be able to get back to Victory Lane here. Pocono has been a struggle, but it's a lot better now."

Through 14 races in the 2019 season, JGR drivers have now won nine of the events.

Following the break between Stages 2 and 3, the drivers who pit before the break moved up the lineup with Kyle Busch taking over the top spot.

On the restart on Lap 106, he was followed by Harvick, Bowyer, Hamlin and Elliott.

Harvick challenged for the lead on the restart but Busch received a push from Hamlin and was able to clear the field to keep the top spot.

With 45 laps remaining in the race, Kyle Busch continued to hold a small but stead lead over Harvick with Hamlin in third, Bowyer in fourth and Jones in fifth.

Keselowski elected to pit under green with 41 laps to go as his window opened to make it to the finish without another stop for fuel. Keselowski’s teammate, Logano, also stopped for fuel.

With 37 laps to go, both Kyle Busch and Harvick elected to make their stops, which handed the lead over to Hamlin.

Shortly after his stop, Harvick was penalized for having an uncontrolled tire and was forced to return to pit road for a stop-and-go penalty.

Suarez led the way with 35 laps remaining as he and four other drivers still had not made their final pit stop. Kyle Busch, the first to pit, was running in sixth.

Suarez pit with 26 laps to go and Paul Menard followed suit, leaving Byron in the top spot and Daniel Hemric in second. Kyle Busch moved up to third.

Byron stopped with 25 laps remaining and made a fuel-only stop. Hemric final made his stop on Lap 140 which allowed Kyle Busch to move back into the lead.

Once the stops were completed, Busch held about a 3-second lead over Jones. Bowyer ran third, Keselowski fourth and Hamlin fifth.

Ricky Stenhouse Jr. slammed into the Turn 2 wall on Lap 146 to bring out a caution. Many of the top 10 stayed out but about half the field elected to pit for new tires. Byron was the first off pit road among those who pit.

On the restart with nine laps to go, Kyle Busch led followed by Jones, Bowyer, Keselowski and Hamlin. Byron lined up 12th.

Kyle Larson hit the wall after gaining several positions on the restart and was forced to pit under green after winning the race’s first two stages.

With five laps remaining in the race, Kyle Busch’s lead has grown to more than 1 second over Keselowski while Jones ran third.