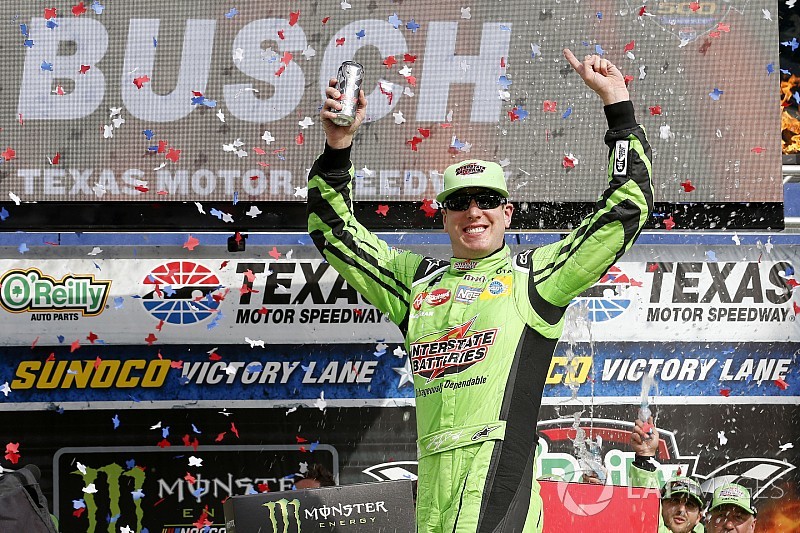 Kyle Busch admitted it was somewhat of a relief to capture his first Monster Energy NASCAR Cup Series victory on Sunday.

But not because he thought he was never going to win again, but more because it served as affirmation that he and his No. 18 Joe Gibbs Racing Toyota team were doing all the right things this year to get to Victory Lane.

In the first six races of the year, Busch had finished second three times and on each occasion it was to a Stewart-Haas Racing driver (twice to Kevin Harvick and once to Clint Bowyer).

On Sunday at Texas Motor Speedway, he again found himself in a classic battle with Harvick, who clearly once again had a car capable of winning.

This time, Busch’s performance on the track and his team’s work on pit road combined to hold Harvick at bay and earn his first win of the season.

Asked after the race if there was a sense of relief to get his first win of the year, Busch said, “Yes, it certainly is. Especially here at Texas, this is probably not one of my best race tracks. We’ve definitely run well here or run better here the last few years.

“But, you know, you tend to struggle sometimes at some places, and this one is kind of one of those, especially with a repave. For me, they’re just not my favorites. To be out front and to have the track position when we did, how we did, was really great for us.

“Overall I felt like our car was either first or second all day long.”

And those are the races that Busch gets most upset about losing.

He has been often chided in his NASCAR career for his reactions when he doesn’t win, but if observers notice closely, Busch’s reactions to not winning are not absolute.

The difference is Busch’s ability to know when he has a car and the circumstances to earn a victory but it’s squandered away for whatever reason. It could be an accident or self-inflicted but the disappointment is the same.

“You know, the second place after Martinsville, it was obviously discouraging. But we were third to fourth for the early part of the race, then we were second or third (toward) the end of the race,” he said.

“Ryan Blaney was really fast. They kind of got tight, I guess, and fell back. But then (Clint) Bowyer was up there. He was one that I just couldn't really keep up with. He was just really good. There wasn’t much there for me.

“You can’t get too disappointed in races that you are meant to finish second. The ones that really tick you off and get you deep down is when you’re leading and you’ve led a lot of laps and somebody passes you, then you finish second. In that regard, somebody outdoes you there at the end.

“I’ve had it happen to me, I’ve also done it to a few people. I know how much those ones sting.”

And he’s not alone.

Harvick dominated Stage 1 of Sunday’s race and certainly looked capable of winning his third consecutive race on a 1.5-mile speedway.

But the No. 4 Stewart-Haas Racing team had its own problems on pit road – issues with the pit guns that produced a slow pit stop and subsequently a loose wheel and an uncontrolled tire penalty.

Harvick managed to work his way back into the runner-up position late in the race but didn’t have enough to produce a pass for the lead.

Harvick’s crew chief, Rodney Childers, noted his disappointment after the race on Twitter: “I can’t explain how frustrating it is when you don’t win with the best car.”

Busch can relate, just not this week.