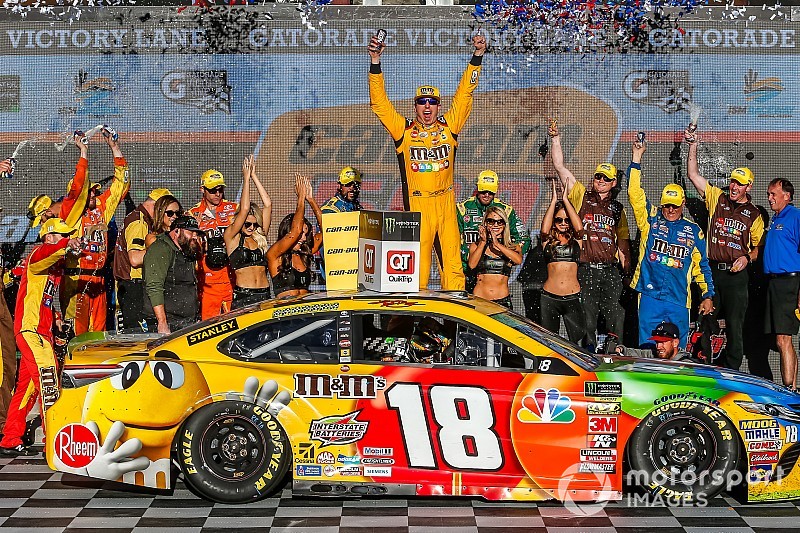 Kyle Busch added another victory to his impressive season and Kevin Harvick survived to make the Championship 4.

Busch held off a furious challenge from Brad Keselowski to win Sunday’s Can-AM 500 at ISM Raceway, picking up his eighth Monster Energy NASCAR Cup Series victory of the season, tying him for the series lead with Kevin Harvick.

The win is the 51st of Busch’s career and his second at Phoenix.

“It’s an awesome team and awesome group of guys. Can’t say enough about everybody at Joe Gibbs Racing," Busch said in Victory Lane. "All the men and women there that work so hard to prepare such great race cars that I get to drive.

"This is a sport that everybody loves to come out and participate in and be a part of whether it’s the military, whether it’s the fans that support the military – it’s awesome to have all that here in NASCAR."
Asked if the win Sunday gives him momentum next week at Homestead, Busch said, "I’d like to think it gives us a lot, but I don’t know – talk is cheap. We’ve got to be able to go out there and perform and just do what we need to do. Being able to do what we did here today was certainly beneficial.
"I didn’t think we were the best car, but we survived and we did what we needed to do today. It’s just about getting to next week and once we were locked in, it was ‘all  bets are off and it’s time to go.' "

With the win, Busch locked himself into the Championship 4 next weekend at Homestead, Fla., where he will join Joey Logano (who won at Martinsville, Va.), reigning series champion Martin Truex Jr. and Harvick (who both advance by points).

Following the break between stages 2 and 3, Kyle Busch elected to remain on the track and stayed in the lead on the restart on Lap 159.

He was followed by Keselowski, Denny Hamlin and Matt Kenseth. Elliott lined up fifth, the first driver who stopped for new tires.

With 120 laps left in the race, Kyle Busch kept a small advantage over Keselowski, followed by Blaney, Hamlin and Chase Elliott.

On Lap 198, Elliott passed Ryan Blaney to move into the third position.

With 100 laps to go, Kyle Busch continued to hold a small lead over Keselowski. Elliott was in third, Blaney was fourth and Hamlin fifth. Harvick was seventh and Kurt Busch remained one lap down.

On Lap 220, Kyle Busch put Darrell Wallace Jr. a lap down, which knocked Kurt Busch out of the free pass position.

Hamlin was forced to pit road for a green-flag pit stop on Lap 222 after cutting a tire.

With 88 to go, Elliott moved to the inside of Kyle Busch and reclaimed the lead.

On Lap 229, Tanner Berryhill spun to bring out a caution as several drivers had already began a round of green-flag pit stops.

During the stops, Elliott was penalized for speeding on pit road, sending him to the rear of the field on the restart.

On the restart with 77 laps to go, Keselowski led the way followed by Blaney, Truex, William Byron and Ryan Newman.

Shortly after the restart, Blaney fell off the pace and dropped back through the field.

On Lap 239, Harvick got into the back of David Ragan, who was running two laps down, and sent him for a spin to bring out a caution. Kyle Busch appeared to get some damage in that incident and pit to make repairs.

On the restart with 68 to go, Keselowski led the way, followed by Truex, Jones and Byron.

With 60 to go, Keselowski remained out front while Kurt Busch (sixth) and Harvick (seventh) raced for the final spot in the Championship 4.

On Lap 264, Ricky Stenhouse Jr. slammed into the Turn 2 wall and a fire briefly broke out in the rear of his No. 17 Ford. The wreck also spilled oil on the banking, which brought out a red flag to clean the track of debris.

Erik Jones, Kurt Busch and Hamlin elected to remain on the track and led the way when the race returned to green with 44 laps to go. Harvick restarted in sixth, Elliott in seventh and Truex in 10th.

On the restart, Hamlin drifted up the track while racing for the lead and slammed into Kurt Busch, knocking him into the wall. Busch’s No. 41 Ford then came back down the track and into Elliott, doing extensive damage to his No. 9 Chevrolet.

“I’m really sorry guys, I didn’t get the job done,” Busch said of his team radio.

On the restart with 37 to go, Jones led the way followed by Kyle Busch and Harvick. Kyle Busch reclaimed the lead shortly after the restart.

With 30 to go, Harvick moved into third as Almirola ran in fourth.

On Lap 287, Alex Bowman spun and hit the wall in Turn 1 to bring out another caution. A fire briefly broke out in Bowman’s No. 88 Chevrolet and he dropped oil all over the track, which required another red flag.

When the race returned to green with 20 to go, Kyle Busch led the way followed by Harvick, Almirola and Truex. Almirola moved into second shortly after the restart.

Yet another caution bunched up the field when Berryhill wrecked on Lap 296. On the restart with 12 to go, Kyle Busch led the way, followed by Almirola, Harvick and Keselowski.

With nine laps to go, Kyle Busch held a big lead after Keselowski moved into second.

Joey Logano: “This doesn’t affect anything” after Phoenix crash