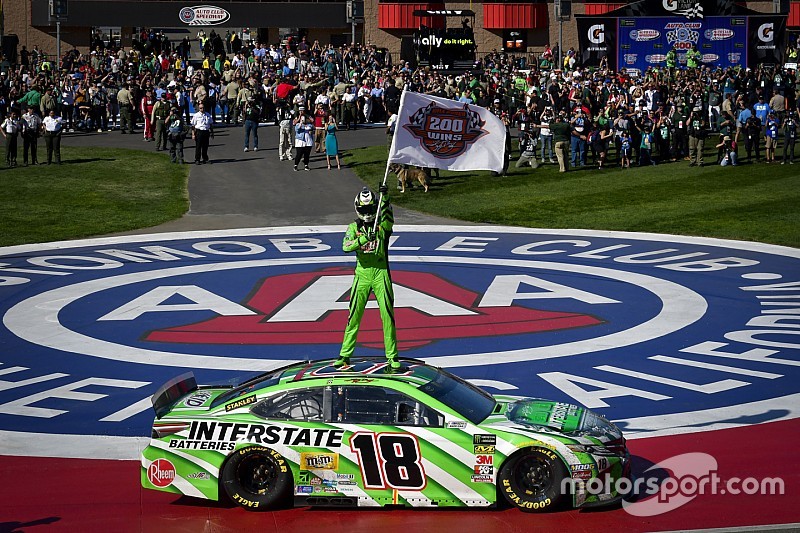 Although it came with a little drama in the final stage, Busch captured his 200th win in NASCAR’s three national series with a victory Sunday at Auto Club Speedway in Fontana, Calif.

Busch had to overcome a pit road speeding penalty following the Stage 2 break but reclaimed the lead with 25 of 200 laps remaining. He held on for a 2.354-second win over Joey Logano.

Seven-time Cup series champion Richard Petty also has 200 wins and all of his came in the Cup series.

"It feels just like (win) No. 1, just like yesterday," Busch said. "Man, I had such an awesome race car. I mean - dang! I'm glad we put on a heck of a show for all the fans out here at Auto Club Speedway.

"It's just awesome. To win 200, whatever it means, it means a lot to me. It means a lot to all my guys, to everyone at Joe Gibbs Racing. You guys are all the best. It's an amazing opportunity to drive for Joe Gibbs and I've cherished every minute of it.

"I just wish we can keep it going, running strong, running well and winning these races."

Following the break between Stages 2 and 3, all of the lead-lap car elected to pit with Kyle Busch the first off pit road but was penalized for speeding on pit road and had to restart the stage from the rear of the field.

Hamlin was also caught speeding on pit road and had to restart from the rear. Truex was penalized for having too many crew members over pit wall during his stop.

That left Keselowski with the race lead on the restart on Lap 128, followed by Harvick, Blaney, Elliott and Almirola.

With 68 laps to go, Clint Bowyer finally took his ailing No. 14 Ford to the garage. He had complained about possible engine issues and had also made contact with the wall.

On Lap 136, Kyle Busch had made his way back into the Top 10, nearly 7 seconds behind the leader, Keselowski.

With 55 laps remaining in the race, Keselowski continued to hold a more than 3-second lead over Harvick. Logano ran third, Blaney fourth and Kurt Busch in fifth.

On Lap 149, Logano moved into the runner-up position behind Keselowski as Kyle Busch continued his march to the front and took over the sixth position from Almirola.

With 45 laps to go, Keselowski held a nearly 4-second lead over Logano with Blaney in third giving Team Penske 1-2-3 out front.

A final round of green-flag pit stops got underway with 40 laps remaining in the race. Logano and Blaney were among the first to head to pit road.

Bubba Wallace had a tire come apart and a caution was displayed with 37 laps remaining for debris on the race track in the middle of green-flag stops.

Five of the six cars on the lead lap elected to pit but Blaney remained on the track and inherited the race lead when the race returned to green on Lap 170. Kyle Busch was the first off pit road and restarted second, followed by Keselowski, Harvick and Logano.

On the restart, Blaney quickly fell back and Keselowski moved from third and back into the lead.

With 26 laps to go, Logano went to the inside of Keselowski and grabbed the lead as Kyle Busch moved to third.

One lap later, Kyle Busch went from third to first and reclaimed the lead he had lost following his pit stop penalty between Stages 2 and 3.

Busch moved out to a more than 2-second lead over Logano with 17 laps remaining in the race. Keselowski remained in third.​