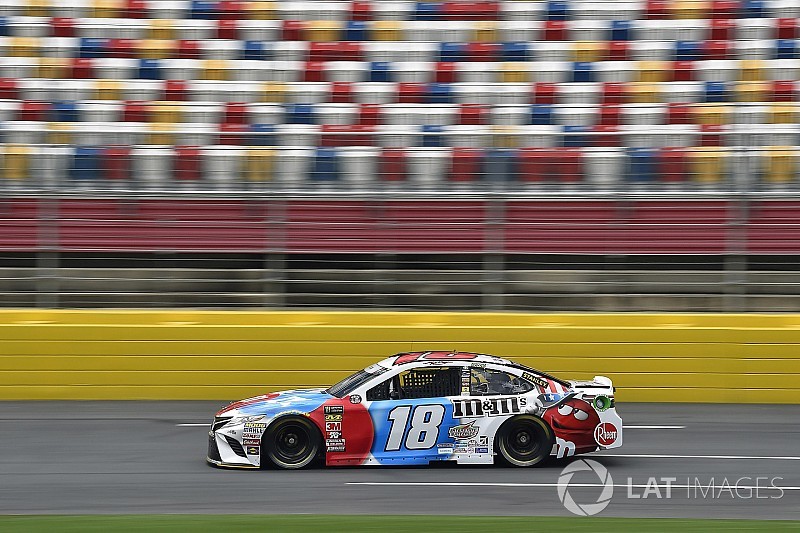 Joey Logano got a jump on Kyle Busch, the pole-winner, and took the lead on the start of the race.

Busch, however, powered past Logano and back to the front on Lap 5. Jones, moved into the runner-up position on Lap 6.

Kevin Harvick, who started 39th after his car failed to clear inspection in time Thursday to qualify, moved into the Top 15 on Lap 25.

Austin Dillon tagged the wall in Turn 2, dropping debris on the track and brought out the first caution on Lap 38. All of the lead-lap cars pit and Busch was the first off pit road. He continued to lead the way on the restart on Lap 44 followed by Hamlin and Blaney.

Ryan Newman had to restart from the rear after a member of his crew went over the pit wall too soon.

Dillon took his No. 3 Chevrolet behind the wall for repairs on Lap 59.

On Lap 67, Harvick had made his way into the top-five for the first time in the race.

With 30 to go in the first stage, Busch continued to lead followed by Hamlin, Larson, Harvick and Blaney.

Harvick was still running fourth when he slammed into the Turn 3 wall after blowing a tire. After crew chief Rodney Childers praised his run up through the field, Harvick said, “Yep. It was going to be fun.”

"I can't tell if we ran something over, a number of things could've happened," Harvick said at the infield care center. "Sometimes those things happen, I can't complain about anything that's happened this year."

Keselowski missed his pit stall during his drive on pit road but elected to remain on the track and inherited the lead on the restart with 12 to go in the stage.

Busch immediately reclaimed the lead on the restart as Keselowski fell back on old tires.

Jamie McMurray was forced to pit on Lap 91 with a flat tire.

With five laps remaining in Stage 1, Busch led the way followed by Blaney and Johnson.

Both Landon Cassill (pre-race inspection failures) and Darrell Wallace Jr. (unapproved adjustments) had to move to the rear of the field to start the race.