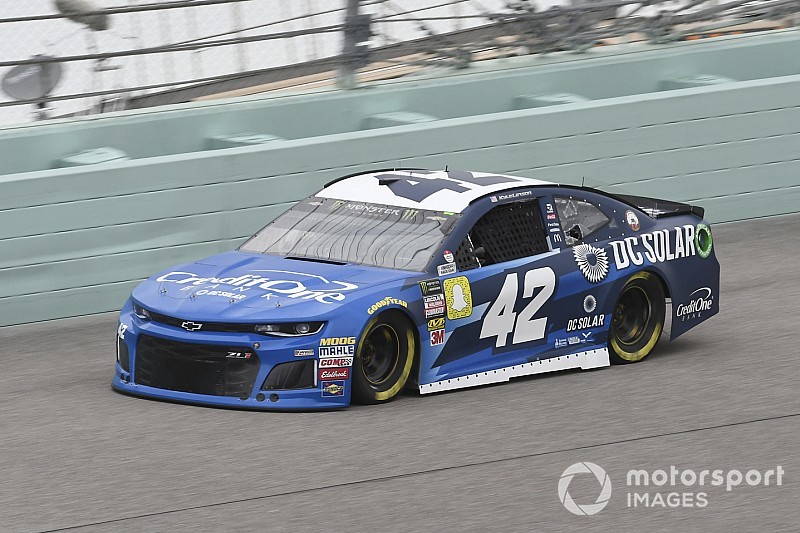 Kyle Larson passed Kevin Harvick off Turn 4 of the final lap to take the Stage 2 victory at Homestead.

Following the break between Stages 1 and 2, Harvick was the first off pit road and remained in the lead when the race returned to green on Lap 87. Larson restarted second, Truex was third and Logano fourth.

Hamlin overshot his pit stall during his stop and was the last off pit road. Kyle Busch also had a slow stop and came off ninth.

Larson powered past Harvick on the restart to take the lead for the first time as Logano moved into the second spot.

Larson took over the lead on Lap 92 as Larson dropped to second and began battling Harvick for position.

Larson went to the inside of Logano to retake the lead on Lap 105 as Harvick continued in third.

Harvick powered around Logano to move into the runner-up position on Lap 107. Logano dropped to third and Truex was fourth.

With 47 laps left in the stage, Truex moved into third as Logano dropped to fourth and Kyle Busch was running sixth.

Larson kicked off a round of green-flag pit stops on Lap 119 as drivers need tires and fuel to make it to the end of the stage.

Once the cycle of stops was completed on Lap 124, Larson returned to the lead, followed by Harvick, Truex and Logano. Kyle Busch ran in eighth.

With 30 laps left in the first stage, Larson had extended his lead to over 4 seconds over Harvick. Truex ran in third, Logano was fourth and Kyle Busch was running seventh.

On Lap 139, NASCAR threw a caution for a piece of debris on the exit of Turn 4. All of the lead-lap cars elected to pit for fuel and tires with Larson the first off pit road, followed by Harvick, Truex, Logano and Kyle Busch. The race returned to green on Lap 145.

Harvick went to the inside of Larson and reclaimed the lead on Lap 147 as Logano ran in third.

With 10 laps left in the stage, Harvick held a small lead over Larson followed by Logano, Kyle Busch and Truex.