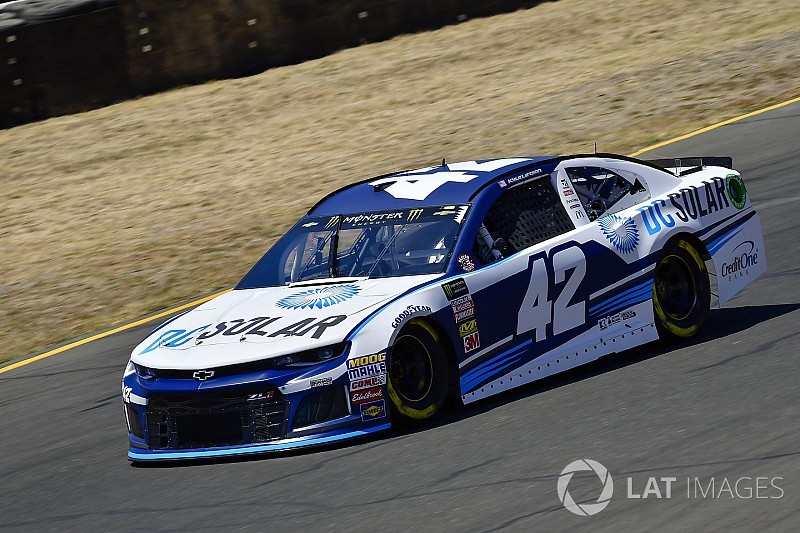 For the second consecutive year, Kyle Larson will start on the pole for the Toyota/Save Mart 350 at Sonoma Raceway.

The Chip Ganassi Racing driver captured the Busch Pole Award Saturday for Sunday’s Monster Energy NASCAR Cup Series race with a qualifying speed of 94.597 mph in his No. 42 Chevrolet.

It was Larson’s second pole of the season (he qualified No. 1 at Dover International Speedway) and the sixth of his Cup career.

Martin Truex Jr. (Furniture Row Racing No. 78 Toyota) grabbed the No. 2 spot with his final-round qualifying effort of 94.484 mph.

“I think the first round, I just wanted to get a fairly smooth lap in and not make any mistakes to try to get into the top 12,” Larson said of his initial run that put him 10th among those who advanced to the final round.

“I felt like I ran a clean lap but I felt there were some areas I could make up some time … a lot in the braking zones. I felt like I made up most of my speed in the final round there.”

A five-time winner in the Cup Series, Larson’s best finish in four career starts at Sonoma is 12th. He is still looking for his first win of the ’18 season.

“I can always qualify good here for some reason bur racing seems to be a struggle.”

Truex, the defending series champion as well as a winner this year at Auto Club Speedway and Pocono Raceway, just missed collecting what would have been his fifth pole of the year. His

“A little bit off in Turn 2,” Truex said of his final-round run. “Missed my line a little bit and was a little late getting back to the gas there.”

Kevin Harvick, the defending race winner, will line up sixth in the 38-car field.

The Toyota/Save Mart 350 is scheduled to go green Sunday just after 3 p.m. ET.

Among those failing to advance to the final round were Kurt Busch, Denny Hamlin and Clint Bowyer, the series’ most recent winner.

Questionable track conditions, the result of a blown engine during K&N Pro Series West qualifying moments before Cup qualifying, resulted in Hamlin and several others waiting as late as possible before making their qualifying attempt.

“Nobody wanted to be first out,” Hamlin said. “Definitely disappointed with our effort. … The car is a lot better in race trim. … Just off on speed there.”

Bowyer, the winner at Michigan two weeks ago, will line up 19th; Busch will start 23rd.