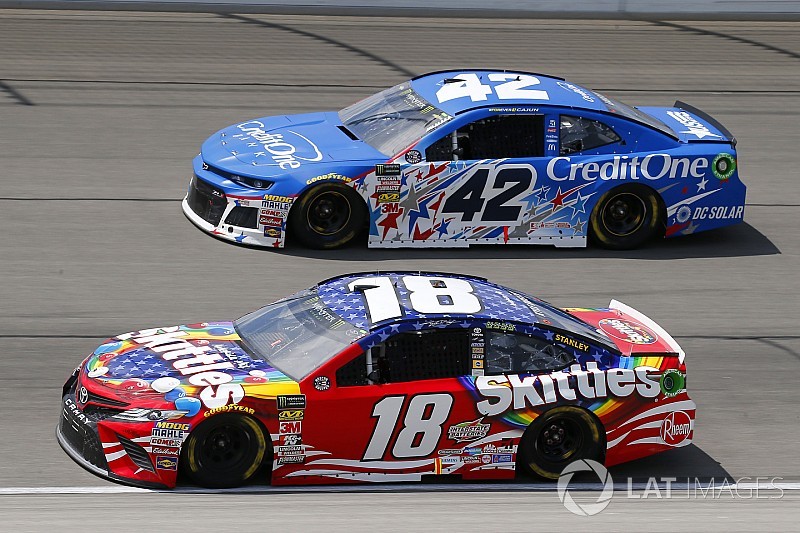 It may look like Kyle Larson throws caution to the wind at times when’s he racing in NASCAR, but he insists there is a method to what may appear as madness.

Certainly part of Larson’s lure is his entertaining style of racing in NASCAR, when he elects to venture up against the walls in the turns in order to gain momentum.

It can be risky, as he has discovered himself when he occasionally slaps the wall, sometimes doing serious damage to his car and even his chances at victory.

Various other drivers join Larson up top on occasion, such as Kevin Harvick, Kyle Busch and Martin Truex Jr., but he far and away is the most likely each week to search for a workable high line around the track.

Just last weekend, Larson and Busch tried repeatedly to match each other’s high lines around the track as they dueled for the victory at Chicagoland Speedway.

“I would say looking back at last week, not the finish, but the whole race, I would say even though to race fans it might not look like I weigh the risk versus reward but I waited three quarters of the race to start running the wall in (Turns) 3 and 4,” Larson said Thursday at Daytona International Speedway.

Larson said he made that decision even though he thought it could be faster to go up top because he didn’t want to increase his chances at making a mistake.

“So, I kind of saved that until the end. And even at the end, I wasn’t running as hard as I could,” he said. “I felt like coming to the white (flag), I was like, ‘Alright, I’m going to try to run wide-open once I get up here,’ and I nailed the corner and got a huge run on (Busch).

“I wish I would have played more risk earlier and maybe I’d have had a better shot to get by him earlier.”

Even waiting until the end doesn’t guarantee there will be no issues.

Last Sunday, Larson’s No. 42 Chip Ganassi Racing Chevrolet nudged the wall with about seven of the 267 laps remaining as was trying to catch Busch and fell briefly off the pace.

Yet three laps later Larson began to close the distance again before both ran into lapped traffic. And the race to the win was on again.

“I feel like I’ve become a lot smarter racer, even when I run the top or do crazy things more so than when I was just getting started; even though, like I said, race fans might watch me race right now and still think that I’m crazy and don’t weigh the risk versus reward,” he said.

“But in my mind, I am. I think my style looks so wild and aggressive that people don’t think I weigh the risk versus reward, but I do. I do a lot.