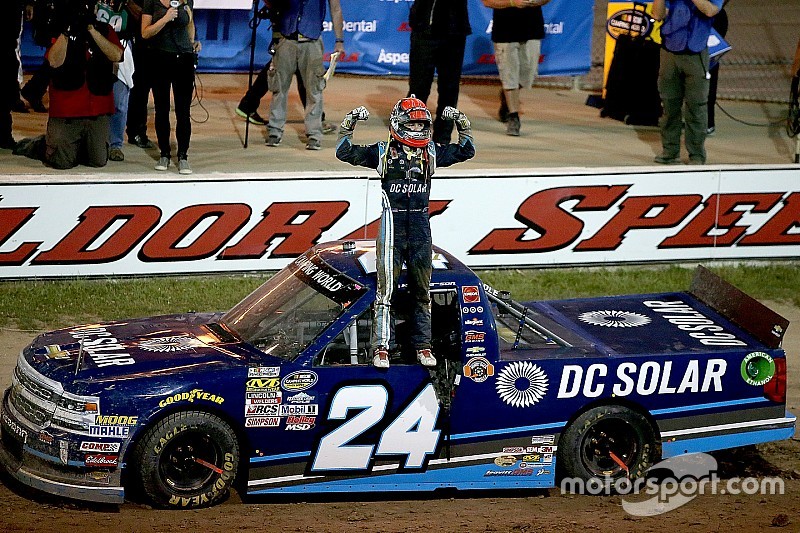 Kyle Larson says he does not want the NASCAR Cup series to race on a dirt track, after Tony Stewart mooted an Eldora race.

Stewart has overseen the emergence of the Eldora Speedway's dirt track race, culminating in a highly popular Trucks race - the third tier of NASCAR - and he now believes the circuit could host either the feeder Xfinity series or a Cup race.

Larson was part of the commentary team for last week's Eldora truck race and is a regular dirt racing competitor outside of his Chip Ganassi Racing Cup commitments.

He believes that the Cup series should not race on dirt tracks, having last done so in the 1970s.

"Tony [Stewart] is probably going to get mad [at me], but I would like to see it [the NASCAR calendar] just stay as it is," he said.

"Xfinity, maybe, but I wouldn’t like to see Cup on dirt. To me, Cup belongs on the pavement and real road course tracks.

"If we went to Eldora I would be excited because I would be really fast and I feel like I would definitely have the best shot to win, but at the same time, I think we are fine not going there.”

Larson then expanded on why the Cup series should remain on circuits, raising the same NASCAR tyre supplier concerns that Brad Keselowski had mentioned on social media.

“I’ve raced the trucks," Larson said. "I feel like if Goodyear could make a way better tyre, [it would help] us to be actually able to use the horsepower, or even more horsepower, in our Cup cars on a dirt track.

"I think it would be a lot more fun.

"I don’t really know how to answer the question without making people mad.”

Larson added that he doubted dirt racing would be exciting enough for the Cup series.

"I’ve run dirt miles, I’ve run Knoxville, I’ve run Eldora, I’ve run Silver Crown [Indiana State Fair] stuff on the dirt miles and when it gets to race time they are not very fun," he said. "They end up just being single-file and really hard to pass around the very bottom inside wall.

"So, I don’t think you could prep those tracks to race good. They are not clay surfaces, they are just dirt. They are horse tracks."

Larson added that he believes the NASCAR Cup series should look to increase horsepower in the current cars to help improve the racing, rather than adding a dirt race.

Changes to the NASCAR calendar will be minimal until 2020, as the series signed a five-year deal in '15 with 23 circuits to ensure their place in the series.

Drivers such as Kurt Busch have been vocal in their desire to see the calendar mixed up.

Darrell Wallace Jr. likely to stay at RPM for 2019