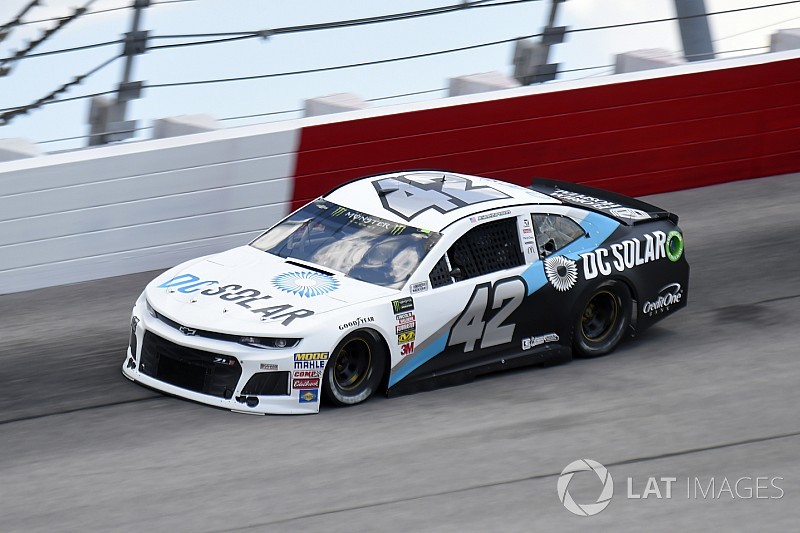 Kyle Larson elected to stay out on older tires and cruised to an easy Stage 2 victory over Brad Keselowski at Darlington (S.C.) Raceway.

Larson, who did not make a green-flag pit stop during the 100-lap segment and will have one more set of new tires than most other teams, cruised to a more than 11-second win.

Following the break between Stages 1 and 2, all of the lead-lap cars pit for tires and fuel with Larson coming off pit road first and continuing to lead when Stage 2 went green on Lap 107.

During the stops, Erik Jones was penalized for having an uncontrolled tire and had to restart from the rear of the field.

Larson had moved out to just over a 2-second lead over Truex 25 laps into the second stage. Logano was in third, followed by Harvick and Keselowski.

On Lap 128, Joey Gase appeared to get turned by Kyle Busch while exiting Turn 4 and wrecked along the frontstretch.

All of the lead-lap cars elected to pit for fuel and tires and Truex was first off pit road and took over the lead when the race returned to green on Lap 134. He was followed by Larson, Harvick and Logano.

Harvick quickly made his way around Larson and into the second position on Lap 136, less than a second behind Truex.

With 60 laps remaining in the first stage, Truex maintained a small advantage over Harvick but Harvick was challenging.

On Lap 147, Clint Bowyer pit under green for what he believed was a loose wheel. When he returned to the track, he was running 27th and one lap down.

On Lap 158, Larson made his way around Harvick for the second position and on Lap 160 he went inside of Truex in Turn 2 to retake the lead for the first time in Stage 2.

Harvick got around Truex and returned to the second position on Lap 161.

With just over 30 laps remaining in the stage, several of the lead-lap drivers elected to make a green-flag stop for fuel and tires. When Truex made his stop on Lap 169, he was penalized for an uncontrolled tire and was forced to make a pass-through penalty.

When Truex returned to the track he was running 20th and two laps down.

With 20 laps left in the stage, Larson held almost a 10-second lead over Harvick followed by Newman and Denny Hamlin. None of them had elected to pit under green.