Two years after his stock car debut, Larson is still "the next big thing"

Earlier that season, a tip from a friend who witnessed Larson’s prowess at the Chili Bowl insisted I keep him on my radar.

“He’s the next big thing,” the pundit said.

Tony Stewart and Jeff Gordon, Sprint Cup champions that followed a similar path as Larson’s, shared that sentiment. Smoke called Larson “phenomenal”. Gordon referred to the youngster‘s talent as “unreal” and added, “I wish we had five or six more of him.”

Gordon might get his wish. On Friday at MIS Larson announced that his girlfriend Katelyn Sweet, sister of fellow racer Brad Sweet, is expecting in December.

“It was December 29th the first time she went then it was Christmas now it is kind of back to December 29th,” Larson said. “Christmas sounds cool so I will go with Christmas.”

After sitting down with Larson prior to his ARCA debut at the two-mile track nestled in the Irish Hills in 2012, it’s hard to fathom he would be juggling an aspiring NASCAR career and fatherhood so early on. At that time, Larson appeared to be 19 going on 40.

Perhaps it was because Larson had already raced for 12 years at venues from coast-to-coast.

“Obviously, I want to get to the Cup series someday,” said Larson, who qualified seventh and finished a respectable 13th in his ARCA debut.

“But if I could ever get a shot at running the Indy 500 that would be real cool. To race in a series week in and week out, I’d like to run NASCAR for sure. They’re not going to move me up until I’m ready and I wouldn’t want to either.

“Hopefully, as each year goes on, I move up more and more but I’m just taking it as it comes. As of right now, I just want to go out and win as many races as I can and try to build my name up even more. I just want to win.” 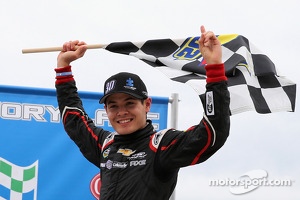 Immediately following that race, it was off to another track. In 2012, Larson went on to earn 30 wins while competing in 123 races in 12 different racing series including the K&N Pro Series, where as a rookie he won two races plus the series title.

Larson seemed like a natural in his four truck starts. He nearly won at Phoenix and led 48 laps in the season finale at Homestead-Miami Speedway before his truck was wrecked. Five month later, he led 187 of 205 laps at Rockingham for his first truck win. Larson then finished second to Austin Dillon in the Mudsummer Classic last July. 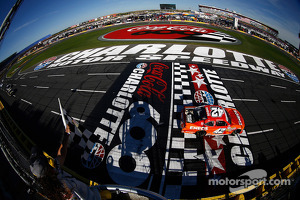 As Larson has moved up through the NASCAR ranks over the last two years, it’s been a slow but steady process. He didn’t set the world on fire in his freshman season in the Nationwide Series. Larson methodically opted to hone his craft instead. He finished second four times and posted top 10s in half of his races before he ended up eighth in the standings. In 2014, Larson won two NNS races -- Auto Club Speedway and Charlotte Motor Speedway -- in his first 11 starts.

Ganassi Racing eased Larson into his first Sprint Cup start last fall at Charlotte Motor Speedway. Although his engine expired before he could finish the race, the rookie had veterans following his line around the track before his night ended prematurely. In his four 2013 starts, his best result was 15th in the Homestead season finale. 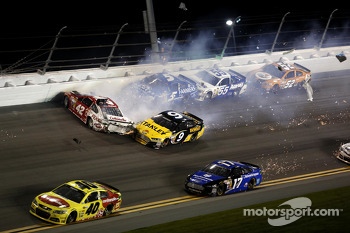 This year in Cup, Larson, 21, battled back from a 38th-place finish in the Daytona 500 to 10th in the point standings in the following 14 races. He’s posted eight top-15 finishes under the direction of crew chief Chris Heroy. His best finish of the season was second at Auto Club Speedway and he won the pole at Richmond International Raceway.

At Pocono last weekend, Larson led his first laps in a Cup car (seven) and posted his third top-five finish of the season. The result came after well-developed strategy which included participation in last Saturday’s ARCA race. Larson, like most kids from his generation, isn’t accustomed to a manual transmission. The self-described “worse shifter of all time in a stock car” was schooled by his race team.

“It’s kind of embarrassing missing a lot of shifts,” Larson said after winning the pole in ARCA qualifying. Now I have to drive a stick shift around town. The team is making me. Then I have to go to Bondurant to do some more shifting.

“It was funny at first. Now, it’s not very funny. I have to work on it some. That’s my biggest worry, not missing any shifts. The car is really loud. It’s a Camaro. It’s really loud. Driving through Birkdale (Larson’s neighborhood in Huntersville, N.C.), I feel like one of those 16-year-old kids that just got my license, revving it up and listening to the engine pop. I can’t wait to get through all the tracks I have to shift at a lot and get back in an automatic.”

Larson won the ARCA race and led 66 of 80 circuits. On Sunday, he finished fifth in his first Sprint Cup start in the Pocono 400. 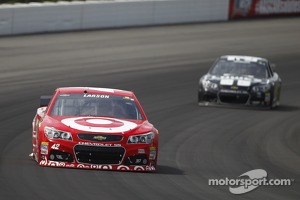 Clint Bowyer --- who was that "young guy to watch" a decade ago -- raced around Larson all day at Pocono before finishing 11th. Bowyer says he's been impressed by Larson's "natural ability" over the last two years.

"His talent is awesome," Bowyer said. "Everybody knew that but I'm in a short amount of time -- a lot shorter than I've seen in just about anybody else -- he's excelled that learning curve. I knew he would go out and tear some equipment up. He was bound to as fast as he's capable of driving and getting into racing situations on those aero-sensitive race tracks that he's never been exposed to before.

"But there's only one way to learn -- from your mistakes -- and he didn't make very many as far as I'm concerned. He put them to good use and is getting good results."

Over the last month, Larson has tested at Road Atlanta, Pocono and New Hampshire Motor Speedway. Earlier this week, Larson attended the Bob Bondurant School of High Performance Driving in anticipation of next week’s event at Sonoma Raceway. The California native hopes to run well at his home track.

“I’m really excited,” Larson said. “I like road racing a lot. I haven’t done much of it. I did three Nationwide races last year and felt like I was pretty competitive at all three of those races. Road America I ran third or fourth most of the race and got caught up in an accident in the last part of the race and was able to get back to seventh. Mid-Ohio I came back from three laps down to be running third on the last lap and got moved out of the way which ended up in a bad finish there. In Watkins Glen we were quick, but I missed a shift there and blew the engine up.

“Really looking forward to going to Sonoma for my home town race. I get to see a lot of friends, go to a sprint car race nearby to go watch on Saturday night. It’s going to be a lot of fun going home.”

While the last two years have been a whirlwind for Larson, he’s pleased with his progress.

“Yeah, it’s all going really good so far,” said Larson, who qualified 12th for the Quicken Loans 400 at MIS. “Top 10 in points; we have been a top 10 car every week pretty much. It really is fun I’m having a blast this year. A lot of stuff going on, me and Katelyn just found out we are having a baby so it’s a really exciting time. How good the racing has been going, a new house, all that and now that so it’s been a lot of fun.”