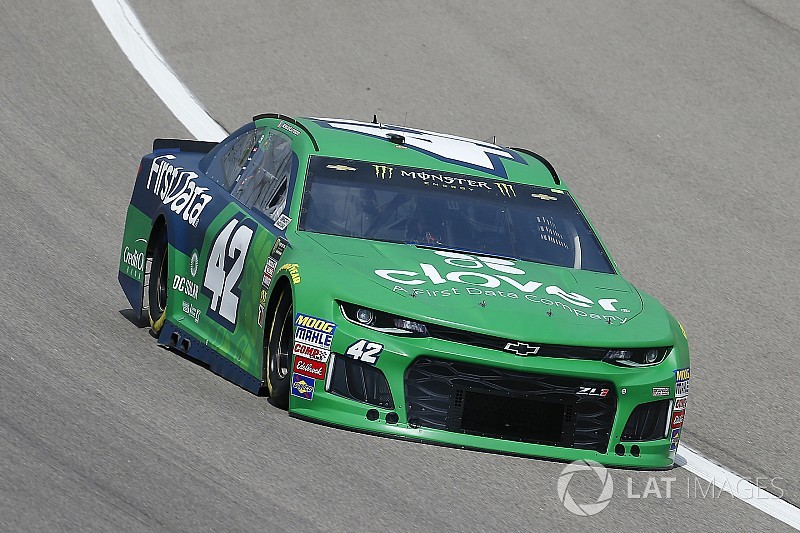 Kyle Larson, who started the race from the rear of the field, took the Stage 2 win at Kansas Speedway over Kevin Harvick.

Larson got around Harvick for the lead following the completion of a round of green-flag pit stops on Lap 131. It’s the first stage win of the season for Larson.

During the break between Stages 1 and 2, all of the lead-lap cars pit for fuel and tires with Harvick the first off pit road and retook the lead when Stage 2 went green on Lap 89. He was followed by Blaney and Brad Keselowski.

Chris Buescher was penalized during the stops for an uncontrolled tire and restarted the stage from the rear of the field.

On Lap 94, Daniel Suarez had to drop to pit road under green for a loose wheel. He was running 20th at the time.

Larson moved into the third position behind Harvick and Blaney on Lap 103.

Keselowski, running fifth, dropped to pit road on Lap 107 with what he believed to be a left-rear loose wheel. He returned to the track in 23rd, one lap down.

With 40 to go in the stage, Denny Hamlin dropped to pit road under green and Keselowski had to make a second pit stop for yet another loose wheel.

Hamlin’s move triggered a round of green-flag stops for several teams, who elected to cut the second stage in half.

Once the green-flag stops were completed on Lap 130, Harvick had returned to the lead, followed by Larson and Blaney. On the very next lap, Larson went to the inside of Harvick and took the lead for the first time in the race.

With 20 to go in the stage, Larson had moved out to almost a second lead over Harvick, followed by Blaney, Kyle Busch and Kurt Busch.