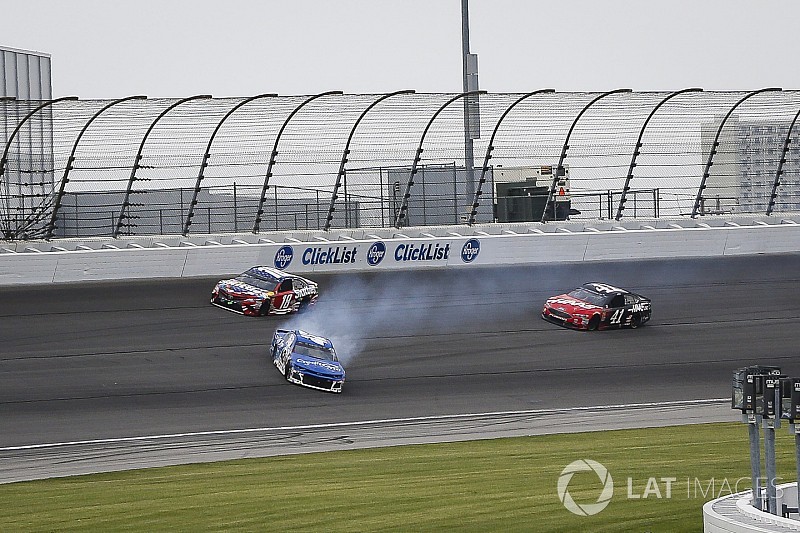 Kyle Larson finished second again but this one was “a hell of a show.”

With about five of 267 laps remaining in Sunday’s Overton’s 400 at Chicagoland Speedway, Larson’s charge to run down leader Kyle Busch appeared to hit a snag when he brushed the wall.

But as the laps wound down, lapped traffic prevented Busch from driving away and Larson got back to him on the final lap. Larson nudged him to get around him off Turn 2 for the lead and Busch retaliated in Turn 3, spinning Larson.

Busch also made contact with the car but managed to get to the checkered flag before Larson’s battered No. 42 Chevrolet.

“I had an opportunity there to slide in front of him and I figured I wouldn’t clear him or I would allow him to drive back underneath me,” Larson said. “So, I tried to get to his door and you know I opened the door for him to retaliate into (Turn) 3.

“I thought it was free game. I ran into him first, he got me after that, maybe a little bit worse than I got him, but that is alright. I love racing Kyle (Busch). I know all these fans are probably mad at him, but – hey – we put on a hell of a show for you guys and that was a blast.”

Larson made the trip to Victory Lane to see Busch after the race.

“I didn’t think I was even going to get the opportunity to race him side-by-side for the win like that. I was getting really tight behind him just from running really hard up top to try to catch those guys.”

Larson remains without a victory this season in the Monster Energy NASCAR Cup Series but it’s certainly not for lack of effort. Sunday was Larson’s fourth runner-up finish in 17 races this season.

While the other Chevrolet teams appear to be struggling with the new Camaro body style, Larson’s Chip Ganassi Racing team has been leading laps and contending for victories.

“I feel like our car is just as good. Today I actually felt my car was a lot better than I was last year here at least,” Larson said. “I mean, I was really, really pleased with that.

“I feel like typically at Chicago I’m an eighth-place car, and today I felt like I had winning speed. I was happy.”

Clint Bowyer rebounds from “confusion” on pit road at Chicagoland