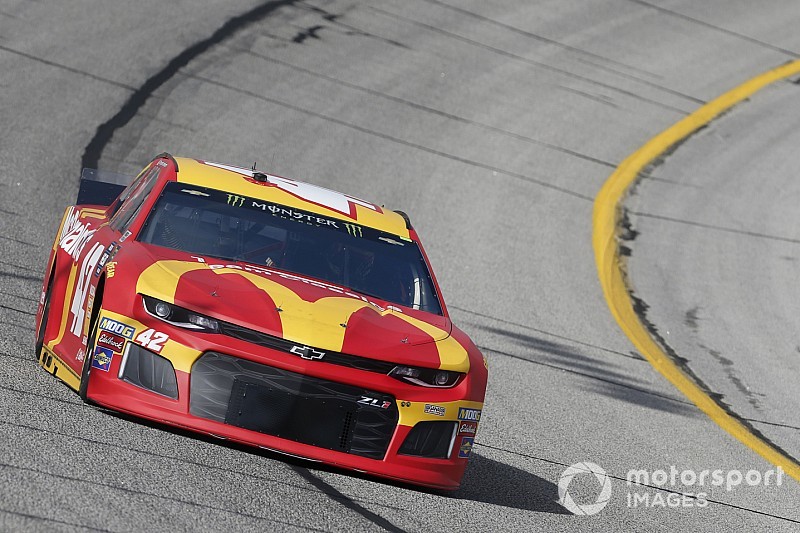 Kyle Larson managed to hold off a fast-approaching Kevin Harvick to claim the Stage 1 victory at Atlanta Motor Speedway.

Harvick moved into the second position with 15 of 85 laps left in the stage but couldn’t run down the leader.

Almirola started from the pole but Stenhouse grabbed the lead on Lap 1 only to see Almirola quickly take it back on Lap 2.

After 15 laps, Almirola continued to hold about a 1-second lead over Stenhouse with Larson running in third.

Through 30 laps, Almirola had moved out to a 2.7-second lead over Stenhouse. They were followed by Larson, Truex and Hamlin.

NASCAR displayed a competition caution on Lap 35, which bunched the field and set everyone down pit road for new tires and fuel. Larson was the first off pit road, followed by Almirola and Harvick. The race returned to green on Lap 41.

Both Logano and Hemric had issues getting into their pit stall which resulted in slow stops and both mired in the back of the field.

With 30 to go, Larson had built up about a 2-second lead over Almirola. They were followed by Hamlin, Harvick and Stenhouse.

On Lap 63, Harvick moved into the third position as Hamlin dropped to fourth.

With 15 laps to go in the stage, Harvick got around his teammate, Almirola, and took over the second position, about 4 seconds behind leader Larson.

Kyle Busch was forced to start the race from the rear of the field after he wrecked in practice and had to move to a backup car. Garrett Smithley also started from the rear after twice failing pre-race inspection.

Harvick wins Stage 2 at Atlanta after battle with Larson