USG to partner with MB2 Motorsports Las Vegas will be first of a four-race primary sponsorship package with the MB2 01 Pontiac Grand Prix. CHICAGO (Feb. 26, 2003) - USG Corporation, a leading manufacturer of building materials for the construction ...

USG to partner with MB2 Motorsports
Las Vegas will be first of a four-race primary sponsorship package with the MB2 01 Pontiac Grand Prix.

CHICAGO (Feb. 26, 2003) - USG Corporation, a leading manufacturer of building materials for the construction and remodeling industries, has reached an agreement with MB2 Motorsports to be a primary and associate sponsor for the 2003 season.

The agreement calls for USG to be a season-long associate sponsor as well as the primary sponsor at four races on the MB2 No. 01 Pontiac Grand Prix, driven by Jerry Nadeau. 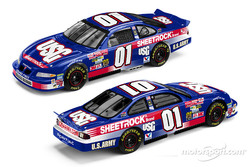 MB2 Motorsports No. 01 USG Pontiac Grand Prix that will compete this weekend in Las Vegas; USG announced it will be a primary sponsor of the MB2 01 Pontiac at four races in 2003.
Photo by MB2 Motorsports.

The U.S. Army, which will be the primary sponsor of the MB2 No. 01 Pontiac for a minimum of 27 races, will be an associate sponsor during the four USG races.

The agreement also calls for a USG season-long associate sponsorship with MB2's teammate, the No. 10 Pontiac, driven by Johnny Benson and owned by MBV Motorsports.

"Our partnership with MB2/MBV Motorsports is an exciting opportunity to extend our involvement in NASCAR Winston Cup Racing," said Fareed Khan, vice president of marketing for USG Corporation. "USG is delighted to be part of the 01 Pontiac Grand Prix team as we all share the same values of commitment, determination and teamwork."

"MB2 has been seeking three partners to join the U.S. Army and we are honored that a blue chip company like USG is the first to come on board," said Jay Frye, CEO/general manger of MB2/MBV Motorsports. "We are proud of the association and look forward to working with USG as the company expands its sponsorship involvement in NASCAR."

Along with its sponsorship involvement with MB2/MBV Motorsports, USG's NASCAR involvement in 2003 includes:

* USG Driver of the Race The program will award the driver, who has the best finishing position of the race and displays the USG decal on his/her car. The award will be split between the driver and the driver's selected charities.

USG Corporation, based in Chicago, is a Fortune 500 company with subsidiaries that are market leaders in their key product groups: gypsum wallboard, joint compound and related gypsum products; cement board; gypsum fiber panels; ceiling panels and grid; and building products distribution. For more information about USG Corporation, visit the USG home page at www.usg.com.