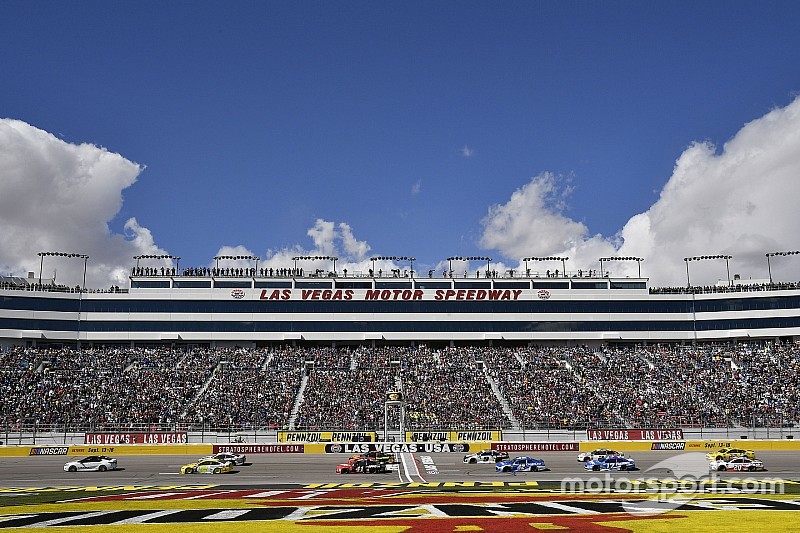 With little time left before the start of the 2019 Monster Energy NASCAR Cup Series season, teams are searching for answers to the new aero package.

They’ll get their final on-track opportunity on Thursday and Friday at Las Vegas Motor Speedway during NASCAR’s last organizational test prior to teams arriving in Daytona Beach, Fla., for Speedweeks.

Fourteen Cup teams will have drivers participate in the test – a much larger contingent then participated in a Goodyear tire test with the aero package earlier this month at Auto Club Speedway.

“We went and did the tire test at California but the biggest piece this week is to see what happens when you get 10, 12, 13, 14 cars on the track at the same time,” said Todd Gordon, crew chief for reigning Cup series champion Joey Logano.

“We had three cars at the California test. Goodyear and (Joe) Gibbs (Racing) and Stewart-Haas (Racing) all worked together when we did tire runs. We went out as a group of three and raced around each other the whole time. But three is not 30.”

Brad Keselowski and his No. 2 team will be participating in this week’s test for Team Penske and Gordon said he is looking forward to the information that will be shared with both Logano and Ryan Blaney’s teams.

“If we get a bigger group of cars together, we’ll see if one car can drive away and what the runs that the cars that are back farther can get and where they can go with them,” Gordon said.

At a preseason media event earlier this week at Charlotte Motor Speedway, Keselowski said this week’s test is “the best true indicator we have before the season starts of how this year’s rules will affect the racing.”

“It should be a good turnout of cars and I’m glad we’re at that test,” he said. “I just want to see what kind of speed we have. That’s kind of the basis of the sport is raw speed and hopefully we’ll have it.”

For a rookie like Ryan Preece with JTG Daugherty Racing, the test also provides an opportunity to gel with his new team and try to get an indication if the multitude of changes enacted by the organization in the offseason have paid off.

“We are going to see where we stack up and kind of go through some changes, figure out what we like, what we don’t like and where we can be better. That is really going to kick off our season,” Preece said.

“Obviously, I’m very excited to get in the seat, but I’m a racer, I want to win, I want to be at that point where we are making gains. Right now, that is our plan.”

Team Penske provides an early preview to the Coca-Cola 600