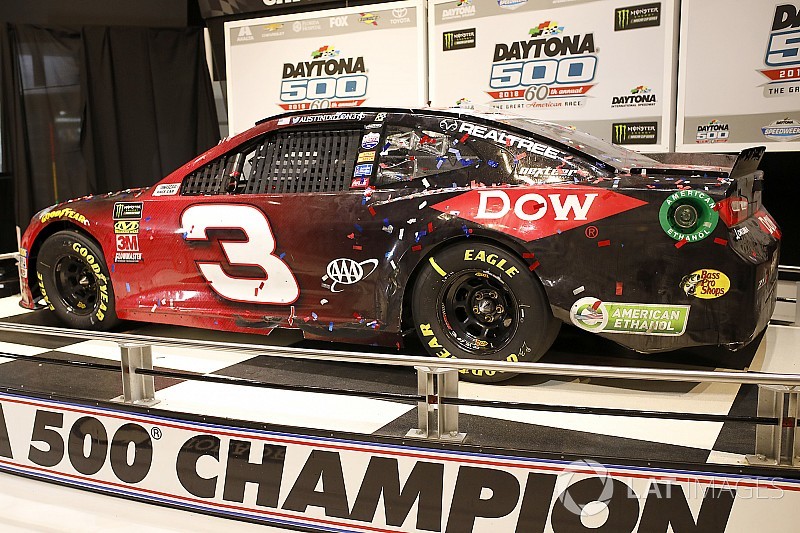 Certainly, the ECR engines have been overshadowed of late by the Roush Yates power—particularly on restrictor-plate tracks. Toyota Racing Development and Hendrick Engines have also won significantly more races over the last four years.

ECR power prevails in the Daytona 500

But on Sunday night, ECR was the class of the field. Five ECR engines finished in the top 10 including the one under the hood of the No. 3 Chevrolet driven by Daytona 500 winner Austin Dillon, who was pushed to the finish by Darrell “Bubba” Wallace Jr. with another ECR power plant.

Richie Gilmore, president of ECR Engines, took a moment to reflect on the company’s accomplishments on Monday morning during the Champion’s Breakfast. For the last decade, the 53-year-old Rochester, N.H. native has been instrumental in developing speed for RCR’s drivers.

“It took a lot of work and preparation this winter—especially with the single-engine rule,” Gilmore said. “That’s the main thing we looked at was reliability along with horsepower. That was the main focus, to make sure they would run the whole weekend. But that was a great effort for everyone to work on reliability.”

ECR had its hands full preparing engines for one-fourth of the field for the Great American Race. Its survival rate? 100-percent. In January, the engines ECR prepared for Cadillac Racing Prototypes in the IMSA ranks finished first and second in the Rolex 24 at Daytona.

Still, there’s been a lot of change on the RCR campus. Over the course of last season, the company downsized its workforce, knowing that Paul Menard and the Menard’s sponsorship would be leaving at the end of the season.

Although the Childress Cup teams dropped from three squads to two with Dillon and veteran Ryan Newman, ECR will continue to supply engines for seven teams in Cup and four in the Xfinity Series. The latest addition came from Richard Petty Motorsports, who switch from Ford to Chevrolet at the end of 2017 and moved into the RCR compound in Welcome, N.C., helped fill the void.

“Unfortunately, we lost a lot of really, really good employees,” Gilmore said. “I think that really made us band together. It made us really, really close. I think it made us a lot stronger as a company.

“Bubba and the whole RPM group worked with us all the winter. It was a big effort with them moving on campus—and it happened late. But the whole week, it seemed like they were part of our team. I look forward to working with them all year.”

ECR also benefits from having five technical alliances outside of RCR. Gilmore says the added resources make the program stronger.

“We’ve got a really good core group led by Wes Adams that goes to the race track every week and works well together,” Gilmore said. “I feel like we have the strongest group at the race track and their ability to get along through good times or adversity is what you need over a long season. You need a group that is willing to do whatever.

“We went to a backup car this weekend (for the 500). We had the engine out of the primary and into the Shootout car (used as the backup) in 45 minutes.”

While the restrictor-plate program represents just four of the 36-points races in NASCAR’s Cup series, Gilmore doesn’t expect the Daytona performance to be an anomaly. He was pleased with the results from the Las Vegas test earlier this month and expects to be competitive when the tour travels to intermediate tracks.

“We came into Daytona with a lot of momentum because we came out of the Las Vegas test with such a good feeling,” Gilmore said. “We knew we could come down here and tear everything up and still go to Atlanta feeling good. Ryan went and tested Las Vegas and came out of there really pumped up. Ryan pushes everything to the limit and when he feels positive, that carries over to the rest of the company and gives everyone a lot of confidence."

NASCAR Mailbag: Send us your questions