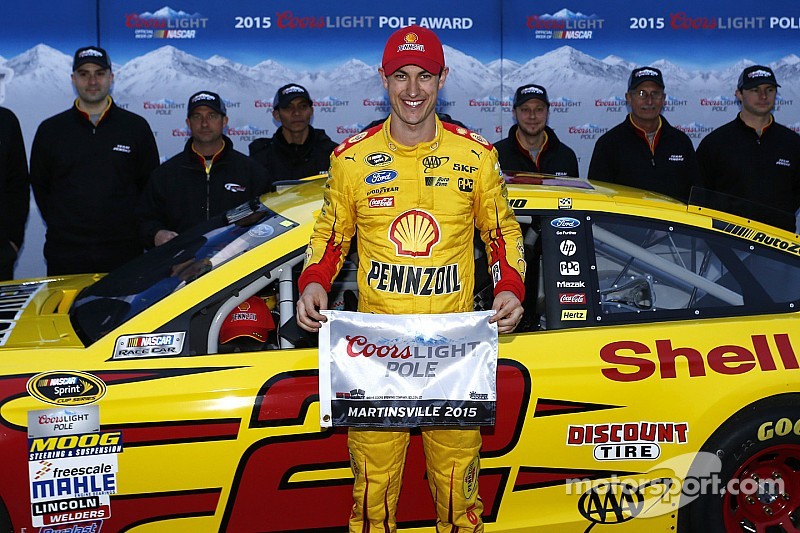 Driver of the No. 22 Team Penske Ford falls short of his own track record.

Joey Logano won the pole for Sunday’s STP 500 at Martinsville Speedway with a lap of 98.461 mph.

Although he set the track qualifying record with a lap of 100.201 mph last fall in qualifying, it’s Logano’s first pole on the half-mile track and his 10th career pole in the Sprint Cup Series.

“That’s as fast as I could go,” Logano said. “There’s not bad about starting first.”

“That’s all I had,” said Gordon, who qualified fourth and is tied with Johnson for most wins at the track with eight. “It keeps getting looser as I run.”

Kenseth, Logano and Johnson posted the top three speeds in the first round. The second session was led by Newman, then Stewart and Gordon.

For October’s winner Dale Earnhardt, a lack of rear grip slowed his effort. Still, he’s confident that his performance will improve for the race.

In the second round of qualifying, Justin Allgaier slapped the wall to bring out the second caution in qualifying with 3:41 remaining in the session. He had posted the 17th fastest session prior to the accident.

Casey Mears qualified for the second round but developed transmission issues before taking his first lap. He posted with the 24th fastest time.

Although qualifying 27th wasn’t the result Chase Elliott was hoping for in his Sprint Cup debut, he was grateful the rain stopped and he was able to qualify.

“Definitely a big relief for us, we’re definitely excited,” Elliott said. Thanks to all these guys for working hard and getting us into the show.”

Brett Moffitt and Chris Buescher, who are also making their first starts at Martinsville, roll off 33rd and 35th, respectively.

Brendan Gaughan and Ron Hornaday Jr. failed to make the field. Hornaday, who had to qualify on time, backed the No. 30 into the wall with less than three minutes remaining in the first session.