Joey Logano took the victory at Texas; the third Ford powered car to win a NASCAR Sprint Cup race in 2014. 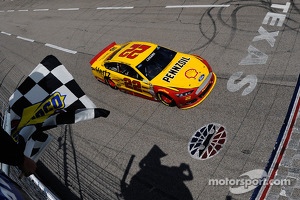 Roush Yates powered Ford engines were the class of the field with drivers running in the top three for most of the 500 mile race. Penske Racing teammates Logano and Brad Keselowski collectively led 191 of the 334 laps until a late green-white-checkered set up a nail biting finish. The leaders went to the pits, where Jeff Gordon and Brian Vickers leapfrogged Logano by taking two tires to Logano’s four. Crew chief Todd Gordon’s call for four fresh tires gave him the edge he needed and he regained the lead position on the last lap to take the win.

“It feels good to be back in Victory Lane,” said Logano. “I felt very confident about this race. It’s been a heck of a season so far. I feel like the Shell/Pennzoil could have been to Victory Lane a couple of times and we’re finally here. We’re here to be a force all year. I’m so excited I can’t even speak – we’re in the Chase!”

The victory was Logano’s fourth in 190 career starts and his second with Penske Racing. Ford Racing now leads all manufacturers in wins at Texas Motor Speedway with twelve and is tied for the most NASCAR Sprint Cup Series wins this season with three.

“Joey was just awesome today,” said Keselowski, driver of the No. 2 for Penske Racing. “He had a great car and did a great job. We just needed a little bit more for the 22, but had a really good day going all the way until the end. The last caution was a shame but we are glad to have two wins for Penske this season.”