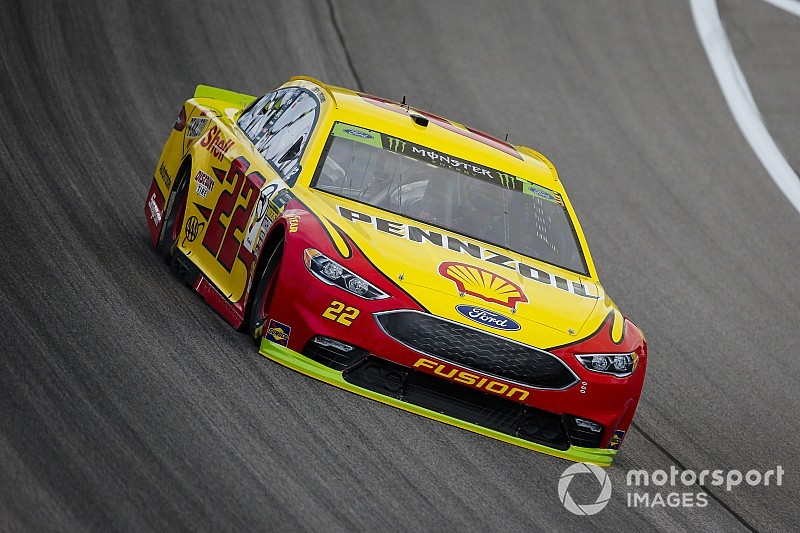 Logano led from pole with a clean opening lap as Team Penske teammate Ryan Blaney moved around Kevin Harvick for the second position.

In the early running, Daniel Suarez got up into the wall in Turn 2 and playoff driver Alex Bowman narrowly avoided running into the back of him. Suarez was forced to pit road for fresh tires and repairs, costing him multiple laps in the process. Despite a crinkle in the right front fender, Bowman carried on and even climbed up to seventh before scraping the wall himself.

Regan Smith was also forced to pit road in the early laps after getting into the wall, cutting a right front tire. He then made a second trip down pit road to serve a penalty for an uncontrolled tire.

Martin Truex Jr. was one of the first to pit on Lap 38 from 11th place and several cars quickly followed suit. Logano gave up the lead and pitted a couple laps later with 40 laps to go in the stage.

Ross Chastain got into the wall and ended up taking his No. 15 machine to the garage, but the race stayed green. A.J. Allmendinger then led nine laps as he stretched the run.

Logano returned to the lead on Lap 53, passing Darrell Wallace Jr. who had yet to pit. Once Wallace did pit, he tagged the tires and damaged his left rear, forcing him to the pit lane a second time.

On Lap 57, William Byron's Hendrick Motorsports Chevrolet went up in smoke with an apparent engine failure, forcing the first caution of the race.

Everyone took the opportunity to pit, but there was some strategy involved. Blaney won the race off pit road with a two-tire call, followed by Almirola and Keselowski with the same strategy. Logano was fourth and the first car taking four tires.

The two-tire call didn't work out at all for Keselowski, who dropped outside the top-ten and lost the opportunity to score any stage points.

Ricky Stenhouse Jr. stayed out and was the leader for a Lap 64 restart, but quickly faded after spinning his tires. Blaney fought hard to hold back Logano for the stage win, but lost the battle with eight laps to go in the stage. Harvick later took second from Blaney after getting him loose out of Turn 4, but he could not run down Logano.