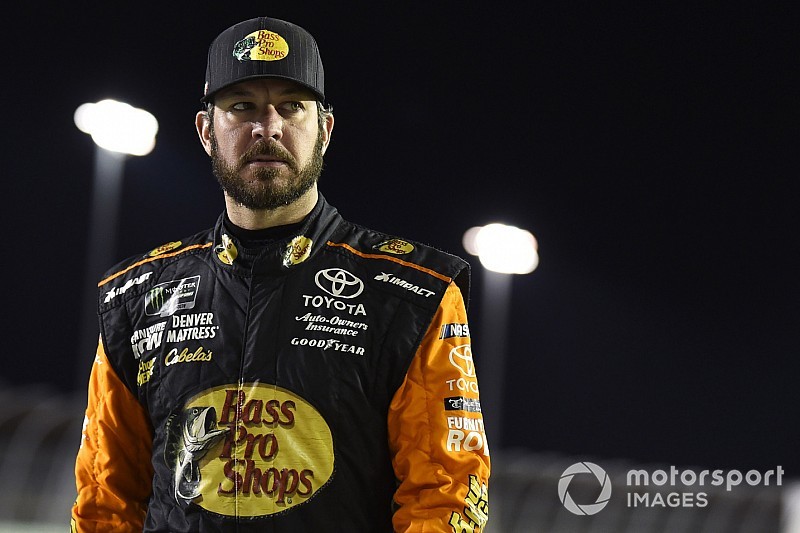 2017 NASCAR Cup Series champion Martin Truex Jr. failed to defend his crown, but he didn't relinquish it without a fight.

Truex struggled in the early running, but that No. 78 came alive as the sun went down. He ran Joey Logano down during the third stage and passed him for the lead on Lap 219, holding the advantage until a round of green-flag pit stops put Kevin Harvick out front.

Logano was second and Truex third, but as the run continued, he closed the gap to the two drivers ahead. He dispatched Logano but before he could run down Harvick, the caution flag waved.

Daniel Suarez and Brad Keselowski collided, sending the former spinning with less than 20 laps to go. There were pit stops, a restart and Truex surged to the lead around his future teammate Kyle Busch.

But Logano's car had short run speed and he stayed with the No. 78, moving to the outside in Turns 1 and 2, powering around him and never looking back.

What did Truex need in that final run to get the job done? Just more time.

“I just needed time. That’s all I needed," he said after the race. "They were faster than us for 15 or 20 laps all day long. It was like a reverse scenario from last year. Last year we took advantage of the short run car at the end – the 18 (Kyle Busch) car should’ve won the race and tonight we should’ve won the race and they (Joey Logano) took advantage of the short-run car. I don’t know what else we could’ve done. Honestly, we worked our guts out all weekend and just to get here, I told you earlier we shut a lot of people up and made them eat crow and that felt good. To come here and almost upset the field and almost win it back-to-back was really awesome.

"I just wish that last caution hadn’t come out. Other than that, I don’t know what we could’ve done.”

The final margin of victory was 1.725 seconds between newly crowned champion Logano and the newly dethroned champ Truex. Harvick finished third and Kyle Busch was fourth -- last of the Championship 4 drivers.

But although Truex will have another chance to win a second title in 2019, Furniture Row Racing will not. The team is closing their doors and will no longer compete next season. Truex and crew chief Cole Pearn will move over to Joe Gibbs Racing in 2019.

“I’m not sure yet to be honest with you," Truex said of climbing out of the no. 78 one last time. "I don’t know. I’m going to miss these guys. Wish we could’ve won it. We had it. We just couldn’t go over 15 laps. I knew that last restart was going to be tough. We were able to get the lead, I just couldn’t do anything. I was just slow for 15 laps. We turned and I’d try to go as fast as those guys and I’d be dead sideways and I just couldn’t do it. I don’t know what else I could’ve done. He passed me so fast I didn’t even get a chance to do anything. We needed more laps. We just needed more time. Proud of my guys and proud of everybody. Thanks Johnny (Morris) and Bass Pro and Auto Owners and 5-Hour, TRD, Toyota, everybody here helped us the past few seasons. Not the way we wanted to go out, but hell of an effort.

He called working with FRR and team owner Barney Visser the "best time of my life. I don’t know what else to say. Those guys have been amazing. They’ve made me a superstar in NASCAR. I’m just very thankful for them all.”