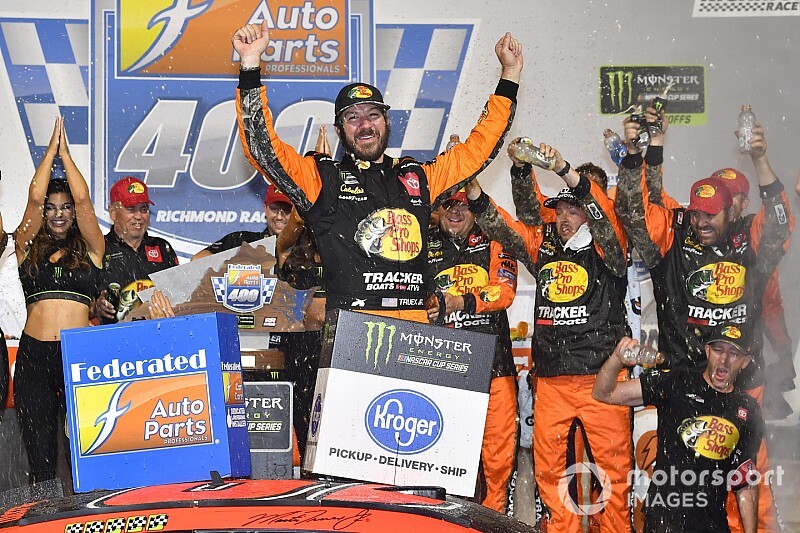 Make that two-for-two for Martin Truex Jr. in the NASCAR Cup Series playoffs.

The win did not come easy as Truex overcame getting spun out while leading the race on Lap 315.

It’s his sixth victory of the season and 20th of his career and the first time in his career he’s won back-to-back races. Truex also won last weekend’s playoff opener at Las Vegas Motor Speedway.

"I don't even know what to say, I really don't," Truex said after the race. "I'm speechless. We did an unbelievable job, just all my guys. Everybody back at the shop - you guys are just building unbelievable race cars right now.

"To sweep both Richmond races is pretty awesome with as much as we led here coming into this year. Just thanks to everybody - it's pretty amazing."

Asked how he overcame the spin out to still win, Truex said: "Luckily I didn't hit anything.  I just tried to keep it off the fence, tried to get spun around and get going, and we ended up ‑‑ because we were pretty far up front, we got going in a pretty good spot and left pit road in a good position.

"Then good adjustments at the end again by (crew chief) Cole (Pearn). This is just freaking unbelievable, so we came here to get bonus points and damn sure we did that."

Denny Hamlin finished third and Erik Jones was fourth as JGR swept the top four finishing positions for the first time in the organization’s history.

Following the break between Stages 2 and 3, all of the lead-lap cars elected to pit with Kyle Busch once again the first off pit road.

Both Kurt Busch and William Byron were penalized for speeding on pit road during their stops and had to restart from the rear of the field.

On the restart on Lap 210, Kyle Busch was followed by Truex, Hamlin, Keselowski and Jones.

Reed Sorenson got in the Turn 2 wall on Lap 243 to bring out a caution. All of the lead-lap cars elected to pit with Keselowski the first off pit road.

Jimmie Johnson missed his pit stall the first time around and had to pit again. Aric Almirola was penalized for speeding on pit road and had to restart from the rear of the field.

On the restart on Lap 251, Keselowski was followed by Kyle Busch, Truex, Hamlin and Newman.

On Lap 253, Newman had powered his way into the third position and began challenging Truex for the second spot.

On Lap 267, Kyle Busch retook the third position from Newman as Keselowski continued to hold a small but steady lead over Truex.

With 125 laps to go, Truex continued to remain behind Keselowski waiting for a chance to make a pass for the lead with Kyle Busch running third.

Truex cleared Keselowski off Turn 4 on Lap 282 to reclaim the lead in the race.

On Lap 312, several lead-lap cars began a round of green-flag pit stops to get new tires and enough fuel to make it to the finish of the race.

Truex spun off Turn 4 on Lap 315 after contact with Ricky Stenhouse Jr. to bring out a caution. Stenhouse had just pit and had four fresh tires. Kyle Busch inherited the lead at the line.

All of the lead-lap cars hit pit road for their final stops with Kyle Busch the first off pit road. On the restart on Lap 322, Busch was followed by Hamlin, Truex, Keselowski and Larson.

With 50 laps to go, Kyle Busch maintained about a 1.4-second lead over Hamlin as Truex continued to run in third. Keselowski was fourth and Newman fifth.

On Lap 356, Truex got around Hamlin to move into the second spot, 1.2-seconds behind leader Kyle Busch.

With 30 to go, Truex had cut Kyle Busch’s lead to about half-a-second. Hamlin ran third, Keselowski fourth and Jones moved back into fifth.

Truex finally got around Busch with 25 laps remaining to reclaim the lead.

With 10 laps remaining, Truex had moved out to almost a 2-second lead over Kyle Busch with Hamlin in third and Jones in fourth.

Ryan Newman's 'season of a day' at Richmond turns heads