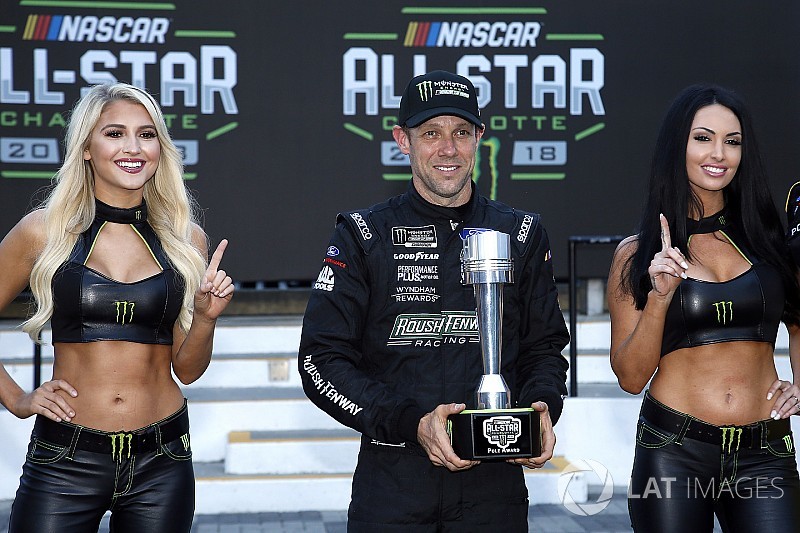 Now this is a return to NASCAR competition much more to Matt Kenseth’s liking.

After struggling in his first race back with Roush Fenway Racing last weekend, Kenseth showed a return to form on Friday night, rocketing to the pole for Saturday night’s Monster Energy NASCAR All-Star Race at Charlotte Motor Speedway.

Kenseth’s No. 6 Ford team mastered the three-lap, four-tire pit top format, posting the fastest average lap speed of 126.915 mph while also having the fastest pit stop of the night (16.1 seconds).

This is the third time in Kenseth’s career he’s started the all-star race from the pole. He holds one win in the event in 17 previous starts.

“It’s neat to get the pole. Ricky (Stenhouse Jr.) was a huge help, obviously,” Kenseth said. “Having both (RFR) cars on the front row is just a testament to the team guys, the pit stops and the engines and the restrictor-plate stuff.

“It’s more about the car than it really was about me. It’s neat to be on the front row with Ricky and I’m looking forward to tomorrow.”

Jamie McMurray was originally among the fastest qualifiers but was penalized five seconds for one unsecured lug nut.

Kasey Kahne overshot his pit stall and had to back his No. 95 Chevrolet up before his team could begin work on his stop. Later, he was penalized an additional 10 seconds for having two unsecured lug nuts. “Not even a quarter of a car length ..,” Kahne said over his team radio. “I hit the brakes and they didn’t slow me down enough on pit road.”

Logano’s team had difficulty securing his right-rear tire during his pit stop and he ended up with slow pit stop (19.9 seconds), although they did not receive any penalties.

Dillon’s team appeared to have problem securing the left-rear tire during his stop, which dropped his average speed.

Ryan Newman was originally fourth-fastest but received a five-second penalty for one unsecured lug nut.

Denny Hamlin overshot his pit stall on entry, which created a long delay. He also received a five-second outside tire violation penalty.

Kurt Busch’s team had difficulty changing his right-rear tire during his stop which caused an extensive delay.

Kyle Larson, the last of 17 cars to attempt to qualify, was so fast coming down pit road with no speed limit that he overshot his pit stall by nearly six stalls.