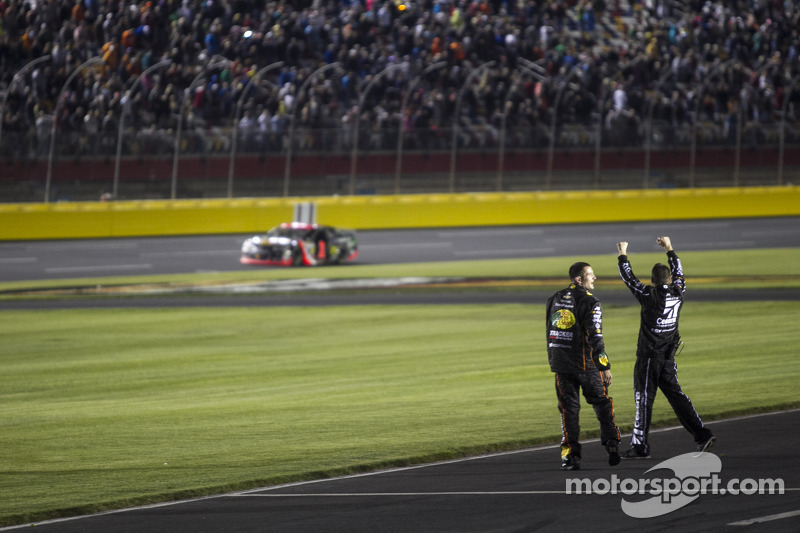 It was the varied contributions of others that put Jamie McMurray in position to battle Carl Edwards.

Never was the concept of NASCAR as a team sport more in evidence that in was in Saturday night’s NASCAR Sprint All-Star Race at Charlotte Motor Speedway.

McMurray clearly was determined to take full advantage of a front-row starting position for the final 10-lap sprint, the highlight of the 90-lap event.

Acknowledging that he drove his car harder than ever before in his NASCAR Sprint Cup Series career, McMurray out-dueled Carl Edwards to take the lead and held on for the win and the accompanying million-dollar-plus prize.

But it was the varied contributions of others that put McMurray in position to battle Edwards in the first place.

Crew chief Keith Rodden called for an off-sequence pit stop for fresh tires under caution on Lap 26. That gave the team the flexibility to take two tires on later stops or to stay on the track between segments, both of which McMurray did to gain track position.

Ultimately, it was McMurray’s pit crew that dashed off its best stop of the evening when it counted most, between the fourth and final segments. Carl Edwards was first off pit road from the first stall, but McMurray was second.

Had McMurray’s crew been a half-second slower, the No. 1 Chevrolet would have left pit road behind Kevin Harvick’s No. 4 instead of ahead of it, and the outcome of the race likely would have been quite different.

Will Dale Earnhardt Jr.'s new Charlotte car be capable of winning the Coca-Cola 600?