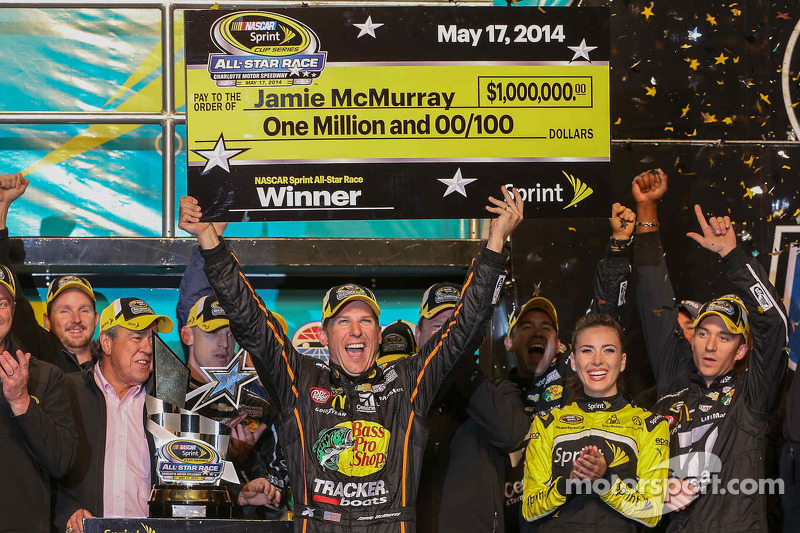 Jamie McMurray surprised everyone and won the All-Star Race after a late-race duel with Carl Edwards.

Charlotte, N. C. – Jamie McMurray boldly surged to the front in the final segment of the NACAR Sprint All-Star race to score the victory in the 30th running of the 90-lap spectacular at the Charlotte Motor Speedway on a cool Saturday evening.

For McMurray, he earned a cool $1.035 million for the high-speed run, plus he earned glory for the Chip Ganassi Racing with Felix Sabates team.

The victor drove the Bass Pro Chevrolet and became the 20th winner in 30 years of this race. In total, he led 31 laps.

Lining up second alongside Carl Edwards for the final 10 circuits, McMurray and Edwards waged a spirited dual with the former eventually blasting by on the outside and was not headed en route to the checkered flag, his third win on the 1.5-mile oval.

Said the winner, “This is an awesome moment. It is so much different from winning the Daytona 500 and the Brickyard 400 because there are no points involved.

“I wanted to make the most out of it, and it was three or four of the hardest laps I have driven in my racing career. And it is one of those memories I hope I never forget.”

Noted Rodden, “Jamie drove a perfect race. And to get a win means a lot to us. I knew we had something special for them. I knew in that final segment us and someone else was going for the $1 million.”

Said Ganassi, “I think Jamie likes this place, and he’s got a nose for the front. When he gets to the front, he settles down and seems to like it. Also, there’s something special about this race, and it is hammer down with 10 to go. We saw special racing tonight.”

Kevin Harvick, who had a dominant car in the four 20-lap segments, tried to chase down the leader, but came up short.

The Hunt Brother’s Pizza Chevrolet opined that faulty pit work did him in. “I thought we had a really fast race car and did all the things we could do on the race track, but couldn’t get it done on pit road,” Harvick stated. “We just didn’t make it happen and ran out of time in the closing laps.

“Our last run was the best we were since we got here,” he said. “Earlier, we were struggling to stay in mid-pack, but we made some adjustments and the car got better, so we were able to hang on for third.”

Dale Earnhardt Jr. ran well to end up fourth ahead of a frustrated Edwards.

The latter praised McMurray for his determination and wished he could have altered his restart strategy in the final run to the checkered flag.

“Jamie just did a perfect job. He ended up sweeping around the outside of me, dragging me down, and it was a drag race. My hat is off to him and he earned it. I drove as hard as I could while he was on the outside, and he gave me just the right amount of room to not wreck me, but still beat me. If I had it to do over again, I’d do it differently but that’s racing.”

Patience pays off for Jamie McMurray with Sprint All-Star win