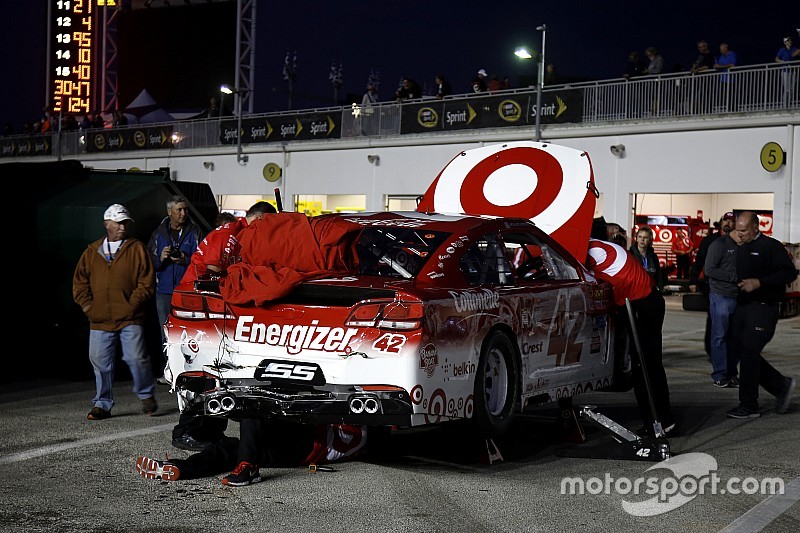 Just minutes into the session at Daytona International Speedway, the oil cooler cracked in Ty Dillon’s No. 95 Chevrolet as he traveled through Turn 2, dropping oil all over the track.

Reed Sorensen immediately slowed up and Michael Waltrip got into the back of Ryan Newman’s No. 31. Also involved in the incident were the cars of David Gilliland and Kyle Larson, who was hit from behind by Chris Buescher.

Both Waltrip and Larson’s teams said they were going to backup cars and both drivers will start their respective Duel race from the rear of the field.

“You’re going so fast and it happens so quickly that I didn’t have a chance not to bump into Ryan and I’m glad he didn’t hit anything and unfortunately I did,” Waltrip said. “I had it cranked to the left trying to keep it off the outside wall, but that didn’t happen and we’ve got some damage, but hopefully the boys can get it turned up.

In addition Kurt Busch, who was traveling right behind Dillon, had his No. 41 Chevrolet covered in oil.

“Hardly any oil got on the ductwork, so I think we'll be OK there,” said Busch’s crew chief, Tony Gibson, over the team’s radio.

Newman said he was just in the wrong place at the wrong time. “I saw the oil and started checking up. It was like ice up there,” he said.

Said Kyle Larson: “Once we got into the oil, it was just a chain reaction and I got shoved into the wall.”

Brian Scott posted the fastest lap in the session, at 199.800 mph. He was followed by Austin Dillon, Kyle Busch, Jimmie Johnson and Paul Menard.

In all, 26 drivers took part in the second Cup practice. Five minutes was added to the practice session to make up for the red flag periods required to clean the track.

Danica Patrick on how she remains calm while racing