Almirola "frustrated and mad and angry" after Dover loss 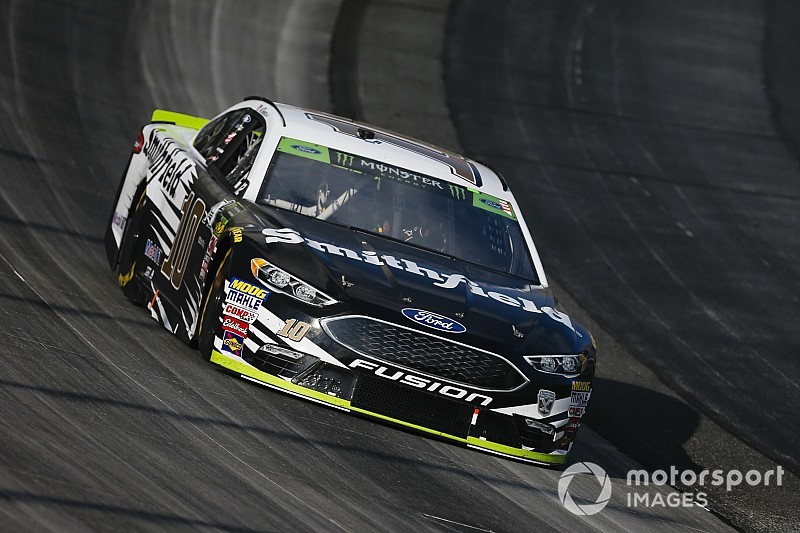 Aric Almirola appeared to have the win in hand in the closing laps at Dover, but as they say, it's never over until the checkered flag flies.

After Kevin Harvick was forced to make an unscheduled pit stop due to a broken valve stem, his teammate Aric Almirola inherited the race lead with 78 laps to go.

The 34-year-old then set his sights on securing his first Cup win in over four years, enjoying a comfortable lead for a time until a caution for debris reset the field roughly 20 laps later. But Almirola was then able to make quick work of Brad Keselowski, who got out front with a two-tire call, and set sail once more.

With just eight laps to go, Kurt Busch was trying to close in on the lead as the duo navigated slower traffic, but the caution flew interrupted their battle. This time, it was Almirola's other teammate Clint Bowyer, who slammed the wall in Turns 3 and 4.

The incident completely changed the look of the race as the No. 10 crew chief John Klausmeier called Almirola down pit road for fresh tires. Several followed suit, but not everyone.

Almirola restarted back in sixth place, albeit with fresher tires than those in front of him. He had just four laps to claw his way back to the lead and got off to a good start, but it all went wrong as the field raced down the backstretch following the restart.

He clipped the wall at the exit of Turn 2 and collided with Keselowski, crashing them both and collecting fellow playoff drivers Martin Truex Jr. and Alex Bowman.

"We’ve had so many opportunities and been so close and had the car to win and been in position and I don’t know, it just seems to not come through," said Almirola. "I don’t know. I’m frustrated and mad and angry. I don’t know. I could have been conservative and probably finish third or fourth like Kurt (Busch), it’s just track position is so tough and it’s so hard to pass here. On that restart I tried to at least go where they weren’t to the top and the 11 moved up to kind of block me and I just got really tight off of two and I bounced off the fence and got into Brad (Keselowski) and tore up a lot of race cars along the back straightaway.

"I hate that for everybody that was involved, but it kind of killed our day too. I feel like we should be over there in Victory Lane celebrating, but we’re not.”

The call to pit

Chase Elliott, who stayed out, went on to win the race. As for his crew chiefs call to pit for fresh rubber, Almirola defended the call made by his man atop the pit box.

"I don’t know. Johnny is in a tough spot right there. I mean, they’re gonna do the opposite of whatever we do, so if we stay out, we’re a sitting duck on old tires and everybody is gonna come get tires behind us. We rolled down pit road and a few of them stay out and a few of them get two tires and the next thing you know we’re restarting sixth, so with only three laps to go it’s really challenging at this race track in particular with it being so hard to pass. That’s one of those situations where you’re damned if you do and damned if you don’t.

"I feel like Johnny made the right call. We had a great car. It was really firing off on the restarts really fast and to come get four tires on it and be on offense.  We’ve talked about that a lot this year about putting ourselves in situations to be on offense and we were.  We put ourselves in position and it didn’t work out. I think it would have been different had we started on the second row, starting sixth was really difficult."

Kevin Harvick: "I'd rather win" and "don't really care about points"