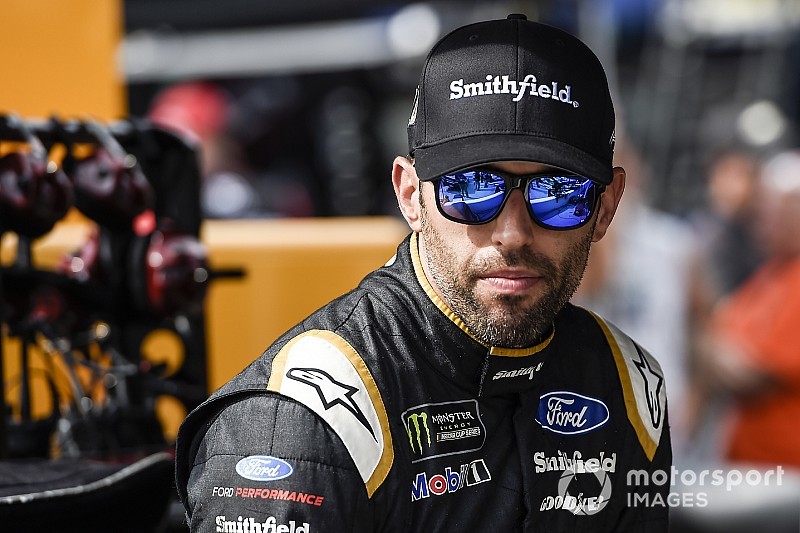 Aric Almirola has so far been happy to fly under the radar in the NASCAR Cup Series playoffs but he believes Round 2 may be his chance to shine.

Almirola built up a nice points advantage with a pair of top-six finishes in the opening round races at Las Vegas and Richmond and despite facing “calamity at every corner” in last weekend’s race on the Charlotte Roval, he squeaked into Round 2.

“It was just one of those weekends. It was just wild and crazy and out of control,” Almirola said of the inaugural race on the Roval. “I felt so helpless so many times throughout the weekend, and I just kept telling myself, ‘Survive, survive, force those guys to beat you, like don’t beat yourself, don’t finish 38th because you wrecked.’

Almirola escaped with the Bank of America 400 with a 19th place finish, and moved on to the second round thanks to a tiebreaker.

Chances of advancing into the Round of 8

Round 2 features much more familiar surroundings for Almirola and the Stewart-Haas Racing No. 10 team and tracks on which Almirola has had past success. First up is Sunday’s Gander Outdoors 400 at Dover (Del.) International Speedway, where Almirola finished 11th in the spring.

“I think a lot of people didn’t expect us to be in this round. I feel like we’re still kind of flying under the radar and I enjoy that position,” he said. “I enjoy it being everyone else that they’re talking about and looking at, and just kind of allowing us to put our heads down and focus on us and what we can do.

“These are really good tracks for me, personally, and for the organization. Kevin (Harvick) won at Dover, and Dover is one of my favorite race tracks. Talladega is a really good track for me. I won an Xfinity race there and always seem to find a way to run up front.

“Kansas has been a great track for me, as well. I feel like these next three tracks line up really well for our team.”

Almirola, in his first season with SHR, is still looking for his first win of the season and a victory within the playoffs would be especially timely, as it automatically locks the driver into the next round.

Almirola has come painstakingly close to Victory Lane this season but he believes that experience will make a difference-maker over the next three races.

“We’ve been through a lot of adversity this year, starting with the Daytona 500 and having a shot to win and, on the last lap, it not working out. Other races, we’ve battled different things,” he said.

“As a team, we’ve gone through a lot. I feel like it’s just building us and making us stronger and stronger going into the Round of 12.”

Take a virtual lap around the 'Monster Mile' with the No. 18 Toyota Camry of Kyle Busch, courtesy of NASCAR Heat 3, which you can order now:

NASCAR Roundtable: Was the Charlotte Roval a success?