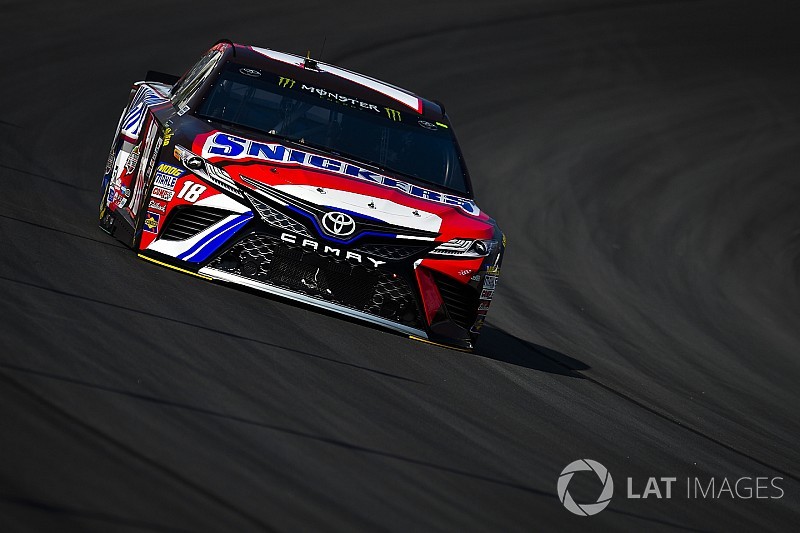 NASCAR and Kentucky Speedway decide to use the special device a second time after getting feedback from drivers on Friday.

In NASCAR racing, you could call 2017 the year of the Dragon.

As has become the custom when a track needs “rubbering-in,” Kentucky Speedway ran the Tire Dragon machine over the middle groove of the 1.5-mile track prior to the Xfinity Series race on Saturday.

The 1.5-mile track was repaved last October with an additional two inches of asphalt. The Tire Dragon is devised to add a layer of rubber to the track and provide additional racing lanes to the circuit.

Before this weekend’s events, Speedway Motorsports Inc. (SMI) used the machine around the bottom of the track hoping to spread out the racing groove.

Where it was used

However, some competitors didn’t believe the track concentrated in the most advantageous areas. Kentucky Speedway President Mark Simendinger listened to the drivers' concerns and elected to take another shot.

“They’re going to concentrate on (Turns) 3 and 4 and widen that out a little bit,” Simendinger told Motorsport.com. “Some of the feedback they’ve been getting is that the racing would be better if it was widened out. I thought we had a fantastic race (Camping World Truck Series) on Friday but everybody wants the same thing.

“There’s kind of an art form to it. And one person’s preferred line is a little bit different than anybody else. So you try to do the best you can. You take in all the input and try to make it the best you can for everybody. Talking to Steve (Swift, vice president of operations and development for SMI), he’s got some feedback that might be a little better to widen it out.”

Kyle Busch, who is running the tripleheader this weekend at Kentucky — and won the pole for tonight’s Quaker State 400 for the Monster Energy Cup Series — says the track is definitely different from when it was repaved last year.

“It takes it a couple years to kind of weather and get into a way that the groove will kind of widen out,” Busch said. “I thank NASCAR and the guys at the track for doing a good job of being able to widen that groove out for us before we got here with the tire dragging and being able to do what we needed to do so we could have enough comfort out there to be able to go out and run as fast as we do.”

Busch won the inaugural event from the pole in 2011 and again in 2015. He’s also been victorious twice in both the Xfinity and truck tours. The only other drivers to win on the 1.5-mile track are Brad Keselowski (three wins) and Busch’s teammate Matt Kenseth (2013).

“I think that when they lay some rubber down on the track, it certainly seems to help a little bit,” Kenseth said. “I’m kind of in the camp as everybody it seems like. It’d make more sense to drag it up higher so we can possibly have a second groove and possibly move up the race track especially when you get to the Cup cars.

“The trucks I know are probably pretty close to wide open and XFINITY cars not quite as much and then us not quite as much again. The more you slow down in the corner, the more it’s nice to have some options to move up and kind of get some rubber in the track.”

Here is a Periscope of the Tire Dragon working its magic from Steve Swift from early Saturday morning:

Tuesday test will mark first step back for Almirola