Dale Jr. admits getting a win this season "is going to be some work" 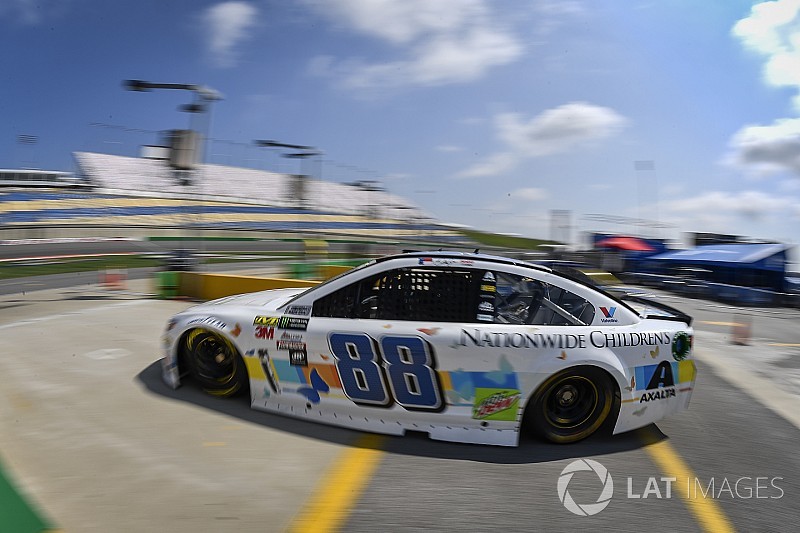 With Dale Earnhardt Jr.’s precarious position in the Monster Energy NASCAR Cup Series, a victory seems the only way he will qualify for the playoffs in his final full-time season.

But how likely is that?

Many believed last week’s race at Daytona International Speedway provided Earnhardt his best chance to grab a win during the regular season because of his past success at the track and in restrictor-plate racing in general.

As it turned out, Earnhardt felt similarly.

“I think at Daytona there was an urgency, you know, because I think it’s an easier race to win for me than it is here,” Earnhardt said Friday at Kentucky Speedway. “Or, I think that I go in there knowing what I need to do to win.

“I felt like I was very aggressive in the race and having a lot of fun and my car was amazing and all I needed to do was to be right there at the end and we didn’t get to do that.

“Do I think that we don’t have any more chances? I think we can show up somewhere and get the job done. But, it’s just not going to come as easy as it might have come at Daytona. And it’s going to be some work.”

Earnhardt currently sits 22nd in the series standings and 88 points behind 16th-place Ricky Stenhouse Jr. with nine races left to qualify for the playoffs.

Although Earnhardt and his No. 88 Hendrick Motorsports team have had some strong runs this season, he has only one top-five finish – a fifth at Texas early in the season. He has also led only 11 laps.

The Texas performance is what gave Earnhardt some optimism entering this weekend’s race at Kentucky.

“We went to Texas and ran really good on the new repave. So, we came here thinking, ‘Man, this might be a great shot.’ I thought we had a car that would win at Texas and I didn’t do what we needed to do,” he said.

“We had the fastest car at the end of the race and I didn’t do things in many, many laps prior to that; many restarts and opportunities there to make passes to win the race. But, we came here thinking maybe we can apply the same things, technically, to the car that we did there since it’s a repave.

“So, mentally we come in with a confidence or maybe that positivity that maybe this is a great opportunity if things can go as well as they did in Texas, we might have a fast-enough car. I don’t know if I’ll do that when we go to every track. But, we came here on a positive front because of our experience on the last repave.”