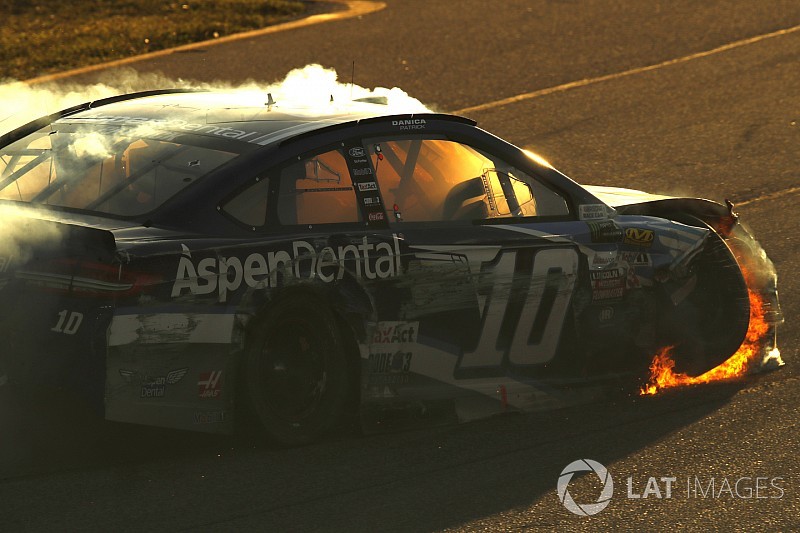 Of the three drivers who were ending their Monster Energy NASCAR Cup Series full-time careers in Sunday’s Ford 400, Danica Patrick was the first to exit.

Patrick got loose through Turns 1 and 2 on Lap 142 of 267 and slammed into the outside wall. Kasey Kahne, who was traveling not far behind her, ended up piling into Patrick’s No. 10 Ford as well.

Patrick’s car suffered extensive damage and almost immediately caught fire. She eventually abandoned it near the entry of pit road at Homestead-Miami Speedway.

This was the 11th time this season Patrick had failed to finish a race. She will be credited with a 37th place finish in Sunday’s Ford 400.

“I hit the wall in (Turns) 3and 4 (earlier) and got some fender rub on the tire and it blew the tire,” Patrick said outside the infield care center. “I went a couple of laps and there was smoke in the car, but they thought it was all right, but it wasn’t.

“I feel angry. I’m disappointed that it was my fault that I got the tire rub.”

In her final season of NASCAR competition, Patrick registered just one top-10 finish, a 10th at Dover, Del., in the spring.

In an announcement on Friday, Patrick confirmed this would be her last full-time season of NASCAR competition but she indicated she hoped to run both the Daytona 500 and Indianapolis 500 races next season as she transitions away from her racing career.

Asked with her season over now, was she looking forward to the Daytona 500, Patrick said, “What I’m not looking forward to is that I have to go sit in my bus and wait for everyone to get done with the race before I can go home,” she joked.

“That sucks, but I think that what’s coming ahead is bright for me and for the way it feels, so I’m excited.”