Wallace: Pocono crash "scared the hell out of me" 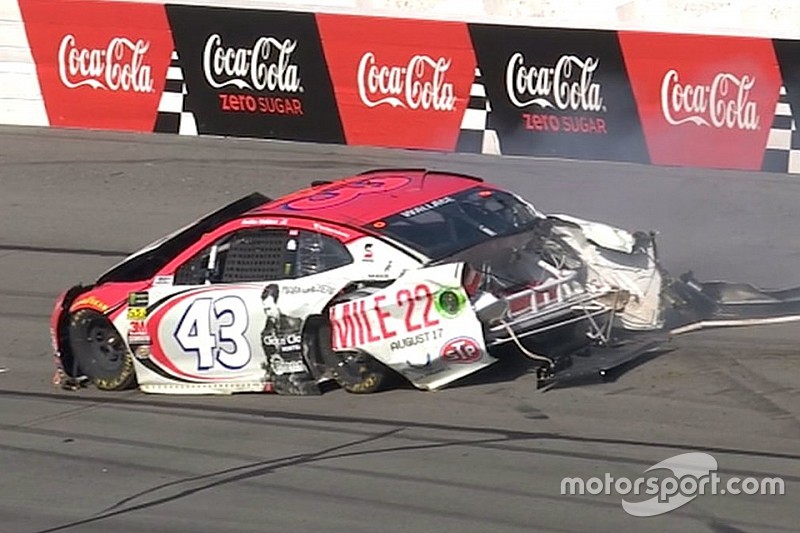 When Darrell Wallace Jr. went to brake down into Turn 1 on Lap 155 of the 160-lap race at Pocono Raceway, he quickly realized something was very wrong.

After being released from the infield care center, Wallace described the lead up to the high-speed accident that would ultimately force the race to be red flagged.

"The lap before, I was holding off Aric (Almirola) going into 1 and the pedal went to the floor so I went to the bottom. You're natural instinct is to just try and use up all the track when that happens. Went to the floor, pumped it up, get through the tunnel and through three here and then down into one, I started pumping it right past the start/finish line and it blew.

"I should have hooked a right into the fence, use that to slow me down but I'm used to turning left there so I turned left and there she went through the grass. Unfortunate, but definitely the hardest one. I'm okay. I will be sore, I will be limping but yeah I'm fine."

"Hardest one of my career"

When the brakes failed on the No. 43 Richard Petty Motorsports Chevrolet, Wallace went careening through the infield before slamming the outside wall which is lined with a SAFER Barrier. It took him a while to exit the car, gingerly sitting down afterwards in order to catch his breath.

He called the wreck the "hardest one of my career. I was just telling them here, there's no feeling like being helpless in that situation, going off into Turn 1 and it scared the hell out of me. I didn't know if I was going to remember it when I hit or not. We're good. Bit my cheek, banged my foot off the pedal. I'm okay though. I'll wake up tomorrow (and) be a little sore, but the safety has come a long way so it's good to be able to climb out of the car."

And despite the dramatic exit, 'Bubba' Wallace still maintained his sense of humor. "The EMTs were worried that I didn't let the window net down soon enough and I was like, hell, that's the last thing I thought about! I'm sorry. Everything was good. They gave me an ultrasound, no twins or anything so I'm good. Just unfortunate ending for us. Our Mile 22 Chevrolet was decent. We were trying to get by and trying to salvage a decent finish and just had brake failure."

Wallace placed 33rd and the DNF was just his second of his rookie campaign. Coincidentally, his other DNF of the 2018 season came at Pocono as well. He heads into Watkins Glen 25th in the standings and will likely need a breakthrough victory in order to make the playoffs, but for the time being, it's safe to say that the 24-year-old is just happy to have escaped Sunday's accident unscathed.