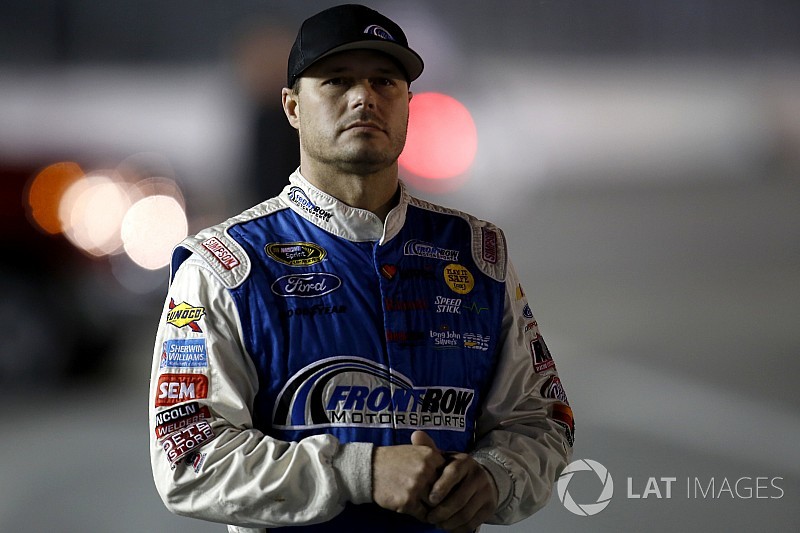 Veteran will attempt to start his eighth Great American race driving for RBR Enterprises in February.

For the first time since 2015 David Gilliland will return to Daytona International Speedway and attempt to start the Daytona 500.

The California driver is teaming up with RBR Enterprises and team owner Ricky Benton to make the season opener for the Monster Energy NASCAR Cup Series race on Sunday, February 18th.

This pairing marks the first time the driver and car owner have teamed up since 2015, when Gilliland made seven starts for RBR in the NASCAR Camping World Truck Series with a season-best finish of sixth in the season opener at Daytona.

“After talking with our partners, we felt the time was right to make a move into the Cup Series,” said team owner Ricky Benton. “Getting David (Gilliland) back on board was also key. Having a veteran driver with his experience and success on restrictor-plate tracks – with whom Hester has familiarity – gives us a leg up as we try to make the race.

“I am thankful for Roush Yates, Carquest, Highland Construction and the entire Black’s Tire family (Benton owns Black’s Tire) for going racing with us.”

Gilliland has made 232 career NASCAR Cup starts between 2006 and 2016 and has started from the pole twice at Daytona (2007 and 2014) and has scored a total of three poles, four top-five and eight top-10 finishes in his Cup career.

“One of my greatest memories in my racing career was pulling into Daytona for my first Daytona 500,” Gilliland said of his 2007 trip. “Just going in the tunnel for the first time it really hit me. And then we won the pole.

“I’m very excited to be getting back in a Cup car at Daytona. It’s going to be a busy weekend. I’m also running a truck and DGR (David Gilliland Racing) is fielding an ARCA car and two K&N (Pro Series) cars at New Smyrna.”

This will be the first NASCAR Cup race attempt for RBR which has fielded trucks in the NCWTS since 2010 making 79 starts with various drivers. The team made 13 starts in 2017 with Regan Smith driving their truck scoring a pair of top-10 finishes.

Mike Hester will serve as crew chief in both series. The team will continue its long-running relationship with Roush Yates Engines to provide power plants for their Fords.

"Ricky is a great guy and a real racer,” said Gilliland. “I really appreciate the faith he has put in me to drive his first MENCS attempt. Having worked with (crew chief) Mike (Hester) before, I know he has done everything needed to give us a competitive car to go out and qualify and race well at Daytona.

“I think we have a chance to go out and surprise some people.”

RBR Enterprises will compete in a Ford with Roush-Yates Engines and sponsorship help from Black’s Tire Service, Carquest and Valvoline.

Based in Cerro Gordo, N.C. (pop. 199), RBR is bringing with it a long history of success in stock car racing to the Daytona 500. RBR has two third-place and two sixth-place finishes in six starts in the NCWTS at the 2.5-mile “World Center of Racing,”

Prior to joining the truck series, RBR competed extensively in late models and other series, winning the 1998 NASCAR Winston Racing Series Atlantic Seaboard championship as well as the 2002 USAR Hooters ProCup title.