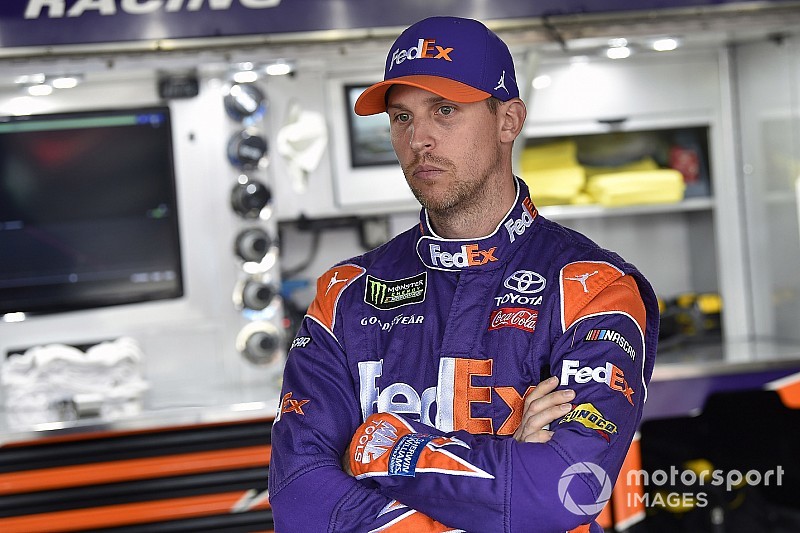 At this point in the season, an uneventful race was good enough to give Denny Hamlin a season’s best finish.

On the final two-lap restart in overtime, Hamlin even had a chance to take the win, as he lined up alongside leader Chase Elliott with two fresher right-side tires than Elliott.

Elliott, however, started on the outside line and was able to power past Hamlin into Turn 1 and cleared him off Turn 2 then held on for his second NASCAR Cup victory of the season.

“I ran as hard as I could through (Turns) 1 and 2. Then through (Turns) 3 and 4, I couldn’t get beside him there,” Hamlin said. “I am proud of the whole FedEx team. It’s definitely a good start in the right direction.

“We chipped away at it all day as we moved up through the field. This is where we deserved. I am proud of this finish and we’ll move on to the next race.”

The finish was Hamlin’s best this season. He had previously finished third on four occasions in 2018, most recently four weeks ago at Indianapolis.

Although he hasn’t won this season, Hamlin did qualify for the playoffs but was one of four drivers in the 16-driver field to be eliminated from further title contention following last weekend’s race at the Charlotte Roval.

Costly mistakes – including several pit road penalties – took some of the top teams out of contention for the win on Sunday but the lack of them by Hamlin and his No. 11 Joe Gibbs Racing team is what led to a better-than-expected finish.

“We had a pretty uneventful race and just kind of kept our nose clean and did everything we needed to do to get a good finish,” he said. “I thought that there towards the end we had probably anywhere from a fifth‑ to seventh‑place car, and we took advantage there on that last (pit) stop to take two tires.

“That put us in the outside line, got a good restart, and then they wrecked behind us, and that put us on the front row. Like I said, (we) didn’t make any mistakes, just chipped away at it.

“We worked our way in the top 10 by the end of Stage 2 and then just got to like eighth, then seventh, then sixth, and just kept getting a little bit better throughout the day, and other guys were starting to falter or their cars were fading, and we took advantage.”