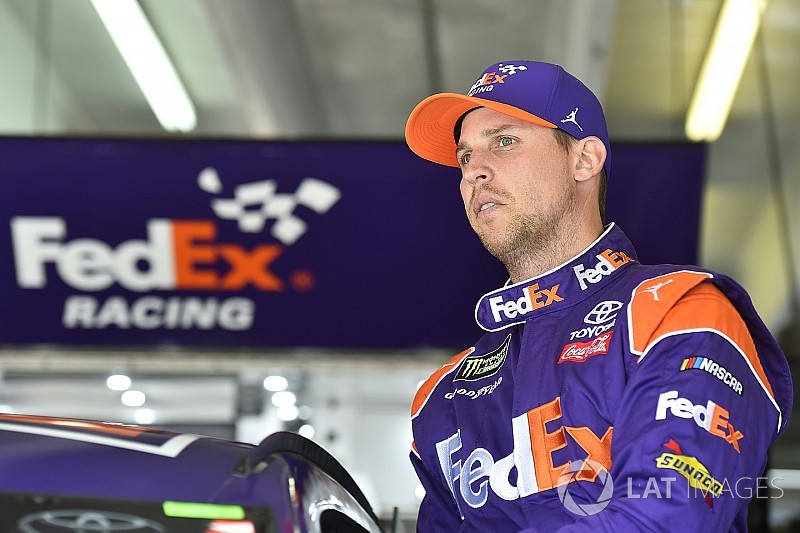 Joe Gibbs Racing teammates Kyle Busch, Denny Hamlin are among the early entries for this charity race to be held at Langley Speedway on April 19 following a two-year hiatus.

The popular pro-am Late Model Stock race will be a 200-lap event with all proceeds to benefit the Denny Hamlin Foundation which supports Cystic Fibrosis research and therapy.

This will be the first time in the eight-race history of the event that Langley Speedway will serve as host.

Southside Speedway hosted the first three events between 2008-2010 before the event was moved to Richmond International Raceway from 2011-2013. South Boston Speedway featured the charity event in 2014 and 2015.

“This is truly one of my favorite events to host because of what it means for the local racers,” said Hamlin. “It’s great they get to race against NASCAR veterans like Kyle, Timothy (Peters) and myself. Plus, I love the attention it gives to these historic Virginia tracks where many drivers, myself included, got our start racing stock cars.

“Langley has always been special to me, so I’m excited to bring this event there, and look forward to raising money for the Foundation as well.”

The Short Track Showdown pits NASCAR stars against local late model racers competing in the NASCAR Whelen All-American Series in the event that will be a sanctioned NWAAS event.

It’s fitting that the event moves to the track where Hamlin, a winner of 31 NASCAR Cup Series wins and a total of 50 career victories in the three NASCAR national series, began his racing career in 1997 in the mini-stock division.

The Chesterfield, Va. native, won his first race and claimed rookie-of-the-year honors during the 1997 season and also captured the division crown as well.

The scheduling of the charity race has been something Langley Speedway owner Bill Mullis tried to get to his historic track for several years according to track General Manager Chuck Hall.

“We had plans in place to host the event in 2016 but unfortunately the speedway didn’t operate that season and by the time we knew we were going to open in 2017, there wasn’t enough time to put the race together,” said Hall.

“We’ve always wanted Denny to bring this special event back to his home track and we’re honored we’ll be able to give our fans a special event and help the Denny Hamlin Foundation raise money for Cystic Fibrosis.”

Langley is a 4/10-mile asphalt oval that hosts NASCAR Whelen All-American Series Late Model Stocks, the NASCAR Whelen Modified Tour and the NASCAR K&N Pro Series East. In addition, the facility has also previously served as the host track for the NASCAR Drive for Diversity Combine.

In addition to the 200-lap Late Model Stock race, the local Super Street Division with also compete on April 19. Advance tickets go on sale Sunday. Fans can go to https://langley-speedway.ticketleap.com/ to purchase tickets online or at the speedway office.