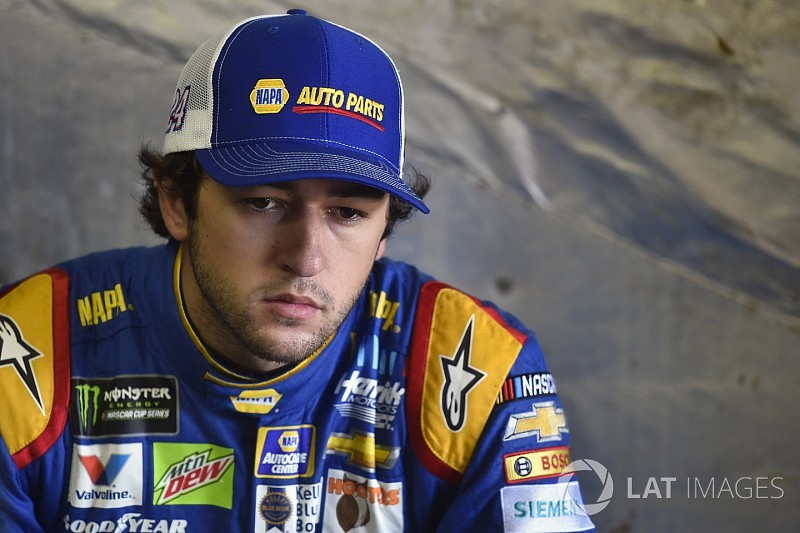 Chase Elliott had to settle for second again at Michigan International Speedway.

Considering that Elliott didn’t feel the No. 24 NAPA Chevy was that great throughout the weekend, finished second to Kyle Larson is not a bad thing.

“I’m really proud of our NAPA Chevy team,” Elliott said. “From where we started the day to where we ended up, I was really proud of our effort. I really think we over-achieved today from what we had on Friday and Saturday and even last night, I was getting a little nervous about how the day was going to go.

“So, I’m happy that we could have a solid day and put ourselves in position and kind of rely on some late-race restarts. We had a couple of opportunities to get the lead. And unfortunately, it just didn’t work out. But we’ll move on. Congratulations to Kyle. He had a fast car today and we’ll try to go get ‘em next week.”

Elliott picked up stage points in the first two segments. After starting 10th, he was eighth following the first caution and gained two positions on the restart. At the end of the first stage, he led the Hendrick Motorsports contingent with an eighth-place finish behind winner Truex.

Following a four-tire pit stop, Elliott restarted seventh for the second stage and maintained a position in the top 10 over the next 60 laps. When the second stage ended, Truex won again and Elliott hung on for ninth-place — the only Hendrick representative among the top 10.

Elliott moved up to eight for the final segment and vaulted to fifth on the restart. He held onto the top five midway through the last stage. After Ryan Sieg wrecked on Lap 151, the leaders pit and Elliott rolled off sixth following a four-tire pit stop for the Lap 155 restart. When the inside lane stalled, Elliott advanced to third.

Moving into the runner-up position

Larson squeezed by Elliott for third on Lap 163. He remained fourth halfway through the stage. Elliott remained on the track during the debris caution on Lap 180. The race returned to green with 15 laps to go. Ryan Blaney pushed Larson to the lead pass Kyle Busch and Elliott followed for second-place when Clint Bowyer ignited the seventh caution after tagging the Turn 2 wall.

On the eighth restart, Blaney got loose and triggered a five-car pile up. Elliott dropped to fourth behind Larson, Denny Hamlin and Joey Logano. With a solid restart and a push from Kyle Busch, Elliott passed Hamlin with three laps remaining for second.

“It was all just about how your push went,” Elliott said. “I am really proud of our effort today. I thought we way improved from where we were last year as far as those late-race restarts go and was able to hang with them and really just kind of rely on the guy behind you.

“Kyle (Busch) gave me a great push. I didn’t give him a very good push that time before. He went a little sooner than I thought he was going to. He gave me a good push and I think somebody pulled out on him. He had to go block them and it just ends up kind of disrupting the whole situation when that happens.”

Still, Elliott scored his best finish of the season and his fifth top-five result. His second-place finish also moved the No. 24 Hendrick Motorsports team to fifth in the owner points — the highest of the four HMS squads.

“A great day from our NAPA Chevy group,” Elliott added. “I think we overachieved today with where we started this weekend, which is always nice when you are here at the racetrack.

“Happy to do that and ready to get on down the road and get through these summer months and try to tune everything in.”

Click on image to watch Elliott talk about his runner-up finish.

Billy Johnson to make NASCAR Cup debut in Petty's No. 43 at Sonoma