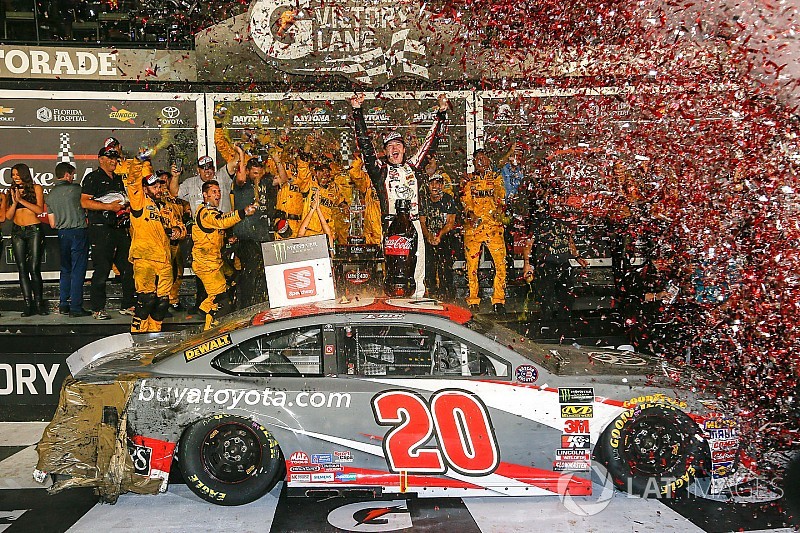 Erik Jones scored his first win Saturday night in the Coke Zero Sugar 400 at Daytona International Speedway and the 22-year-old might have a few more visits to victory lane before the 2018 season is in the books.

Confidence is an amazing thing and it isn’t as if Jones, driver of the No. 20 Toyota for Joe Gibbs Racing, lacked a belief in himself.

But a win erases all doubt. It can turn a decent team into one that’s suddenly contending for wins on a regular basis and before you know it there’s another team angling for parking space in victory lane each week.

Jones and his group, led by crew chief Chris Gayle, could be just that team.

A surge in performance

Saturday night’s impressive victory capped off a three-race run that saw Jones finish seventh at Sonoma, sixth at Chicago and first at Daytona.

The Daytona victory earns Jones and his team a spot in the upcoming playoffs, but it was the Sonoma result that was mentioned as being the catalyst behind the team’s recent surge.

“I would tell you the last three (races) I’ve really noticed a change in him,” Gayle said following Jones’ popular win at the 2.5-mile DIS. “Sonoma was a turning point for us.”

Jones was terrible on the California road course a year ago, so he and the team worked on improving there. Maybe that’s an odd tactic given that the series runs only two true road courses each season (the Charlotte Roval scheduled for the Playoffs remains an unknown). But it appears to be paying dividends.

Gayle said the team “went into that weekend knowing it was going to be tough and we were going to have to battle and the first 10 laps of that race were pretty tough. It could have gone either way.”

Instead, his driver “dug a little deeper, found something different,” and came away with a hard-earned seventh-place finish.

“And I think that confidence carried over to Chicago,” Gayle said.

Plate racing versus the rest of the season

You could point to Saturday’s win and say well, it’s Daytona and a restrictor-plate race and anything can happen so why read too much into a single victory there? Success at Daytona and Talladega can be difficult to gauge - Austin Dillon won the Daytona 500 earlier this year but didn’t pull off another top 10 until Saturday night.

Is a victory there a barometer or aberration?

“I’m expecting bigger things from him,” he said of his young driver. “You get a little confidence in him – we all know we can do it at this level. it just kind of helps you once you … get the first win. The entire team knows that.”

Jones knows it, too. He’s a year older, a year wiser, a year more experienced. He still has plenty to learn and there are others with more seat time and more success. But he’s headed in the right direction. Saturday’s victory is proof enough of that.

“I think a year in the Cup Series you grow a lot,” Jones said. “You learn so much. I never learned as much in any other series in any other year racing as I did last year … things that I’ll take with me probably for the rest of my career in NASCAR.

“It’s definitely been a journey but Chris has done a good job of helping me out with that. I’m still only 22 … but definitely I would say a slightly calmer 22-year-old than I was (as a) 21-year-old.

“We're still working to sand the edges a little bit, but we're definitely getting there.”

Kahne ends up short of the win, but "we had a really good shot at it”

Truex on Daytona wrecks: "A lot of guys just wing it, go for broke”