Stewart: Mustang an "iconic race car" that belongs in the Cup Series 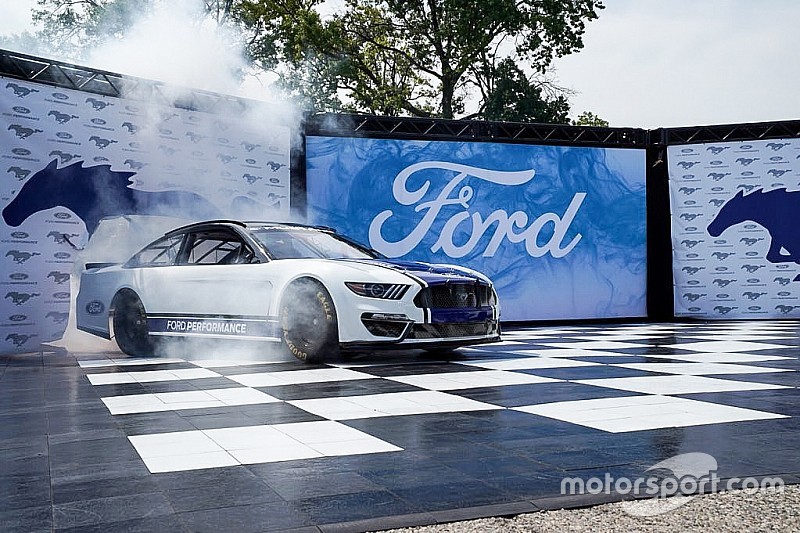 Ford Performance has unveiled the NASCAR Cup Mustang, which will replace the Fusion in the Monster Energy Cup Series in 2019.

The Mustang will become just the fourth model fielded by the blue oval in the modern era of NASCAR, joining the Thunderbird, Taurus and Fusion.

Stewart-Haas Racing co-owner Tony Stewart wheeled out the car Thursday afternoon, giving the racing community their first glimpse at the new Mustang. "To be the one to drive the Mustang here was a pretty cool honor," said Stewart. "First time I've been in a Cup car since Homestead in 2016 so the first time I've gotten to drive a Ford finally in the Cup car. It's a beautiful race car, cannot wait to get our four drivers and teams going in this race car.

"To work with the new Mustang and their group -- it's been a lot of fun and I know our engineers had a blast working with everyone at Ford on this Mustang," he continued. "It's such an iconic brand and iconic race car that has been everywhere and now it's finally in the elite series of NASCAR where it belongs."

The high praise didn't end with the three-time champion though. Current Ford drivers had nothing but good things to say about the new Mustang.

"It looks great," said Kevin Harvick, who (along with Kyle Busch) leads the series with six victories this season. "You guys have heard me say this before, (but) just the commitment Ford has to Stewart-Haas Racing and this sport in general -- it's fun to be a part of. It's just another step in the process of the things that they're doing. It takes a lot of time, a lot of people, money to just get a car to the point of being able to submit it and put it on the race track. It's fun to see Mustang in the future on the race track."

Joey Logano echoed his sentiments, saying, "Look at this hot rod. I can't wait to drive it." He also mentioned the 'One Ford' attitude that allows the Ford teams to not just excel on the track, but off in the development of this latest car.

His Team Penske teammate Ryan Blaney was delighted to see a race car resemble what is driven on the streets. "Whenever we can make it look like a production vehicle, I think that's what everyone goes for, and can put really great performance behind it too I think is just a bonus. I'm excited to get it on the race track and see what it performs like," he said.

"It's one of the things as a driver we kind of take for granted -- how much actually goes into building these cars," he said of the car's development. "To win, the margin between first and tenth is about a tenth of a second and that's about a tenth of a percent on the car's performance. So for us, trying to find that extra little bit, we rely on the smart people that work here at Ford and their ingenuity to develop some of the best race cars in the circuit and I think this Mustang will fit that bill.

"This is a car I'm going to be having fun driving, but I'm going to have as much fun telling the story about with my friends and my family. When they come look at my race car, I can tell them it looks just like the Ford Mustang, and it's got a lot of power too."