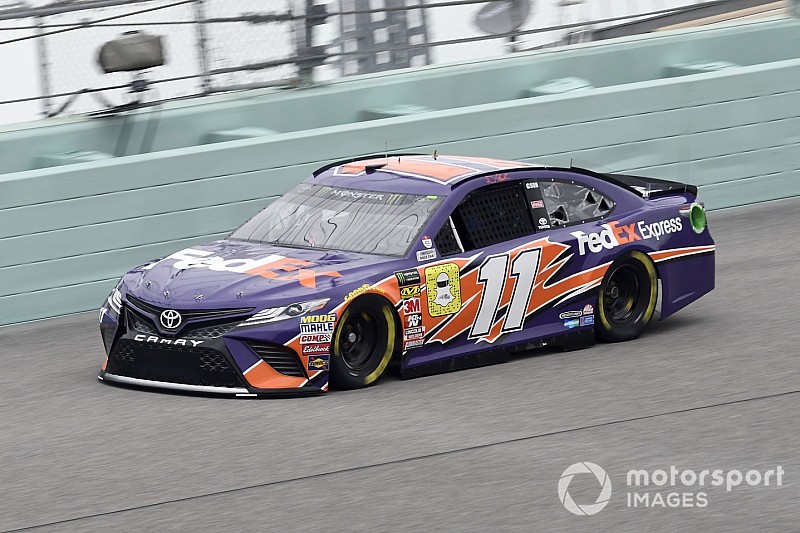 Denny Hamlin has one more chance to pick up a win this season and got off to the best possible start.

Hamlin surprised this year’s NASCAR Cup Series championship contenders by topping the group in the final round of Friday’s qualifying session.

His average lap speed of 173.863 mph was good enough to top his Joe Gibbs Racing teammate, Kyle Busch, to earn the pole for Sunday’s Ford 400 at Homestead-Miami Speedway.

The pole is Hamlin’s fourth of the season and 30th of his career. Hamlin has won at least one race in each of last 12 seasons but has yet to earn a victory this year.

Earlier in the day, Hamlin posted a message on Twitter indicating this weekend’s race would be the last with his current crew chief, Mike Wheeler.

“It’s good for us to get this race team up front and end on a high note with a win,” Hamlin said. “In 2013, we were in the same boat where we hadn’t won a race until the final race and we finally got it done.

“So, hopefully, this is our time to do it. We’re just going to dig in and hats off to the team. We were seventh to 10th in the first two rounds and (Wheeler) just made the right adjustment.”

Kevin Harvick, the final of the four drivers competing for the championship on Sunday, will line up 12th.

Jones surprised in the second round with the fastest average lap speed (174.036 mph).

Also advancing to the final round were Stenhouse, Kurt Busch, Harvick (the fourth title contender), Almirola, Newman and Larson.

Larson went out very late and bumped Alex Bowman from the Top 12 in the final minute.

Among those who failed to advance to the final round were Chase Elliott, Ryan Blaney, Jimmie Johnson, Austin Dillon, Matt Kenseth and Daniel Suarez.

Asked about the prospects this Sunday once again being the final Cup race of Kenseth’s career, he said: “I’m just going to make this an annual deal. I’ll come down here and milk as much as I can out of this every year.”

Kyle Busch led all the title contenders in the first 15-minute session of qualifying, posting an average lap speed of 174.644 mph.

Rounding out the Top 10 were Kurt Busch, Hamlin, Newman, Suarez and Bowman.

The fourth title contender, Harvick, ended up 16th-fastest in the first round.

Among those who failed to advance out of the first round were Clint Bowyer, William Byron, David Ragan, Chris Buescher and Ty Dillon.

Take a virtual lap around Homestead-Miami Speedway with NASCAR Heat 3: