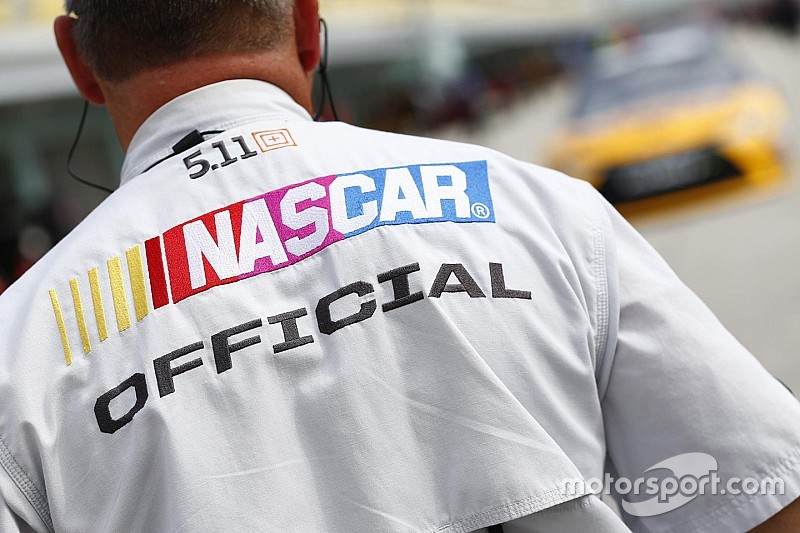 NASCAR’s senior vice president of competition told Motorsport.com last week that the sanctioning body was upping the ante if the teams did not make a better effort at expediting the inspection process.

“There’s a lot of things that we have that we can still do without it having to escalate to points or suspensions or anything like that. If we have to, we’ll try those. If that doesn’t work, we’ll figure out where we go next.”

Bootie Barker, the crew chief of the No. 13 Germain Racing team and car chief Billy Plourde lost their hard cards for three weeks for post-qualifying inspection body modifications. Crew chief Drew Blickensderfer, of the No. 43 Richard Petty Motorsports team, lost his hard card at Michigan. Jason Ratcliff added his name to the list on Friday along with his team engineer after failing inspection four times at Daytona.

The No. 20 car of Matt Kenseth was forced to sit on pit road for 30 minutes until NASCAR released the driver. Kyle Busch, whose No. 18 team made three attempts through inspection at Daytona, was also held. Erik Jones, Martin Truex Jr., Ricky Stenhouse Jr., also endured 30-minute practice holds in Happy Hour at Kentucky Speedway on Friday.

Jimmy Makar, Senior Vice President of Racing Operations for Joe Gibbs Racing, watched two of his drivers and two fellow Toyotas, which share a technical alliance with JGR, wait out the penalties.

“When you go through (inspection) too many times, it’s normally a penalty of sitting out practice — but it’s normally the first practice — or the next week,” Makar told motorsport.com. “That’s what the penalty has been. Although, in the past, if it happened too many times or more than (NASCAR) think (is necessary) it could escalate to something more extreme. It’s the first time they’ve done it to us — that I know of — this week with the 78 sitting out also. And the first time they have moved it to the Happy Hour session.

“Obviously, Happy Hour is a little more important practice time than the initial practice of the day because the track is closer to where it’s going to be (during the race). It’s probably a little bit more detrimental to the team, for this. It’s something they told us they would do, but the first time they’ve done it. For the third time (failing inspection), they both got the penalty of sitting on pit road. For the extra time, the 20 car got the hard card pulled for Jason and the engineer.”

NASCAR looking at raising the stakes even higher with the possibility of losing a set of tires or even parking passes for the teams. Makar, a second-generation racer and 40-year veteran of NASCAR, believes it might be time to find a happy medium.

“I hate to see this get to be something where a team gets to the point where they really suffer for something that sometimes isn’t the same problem,” Makar said “In this case, it’s several different things. They failed one thing the first time, another thing the second time. So they bounced back and forth between stations in inspection.

“I understand their thought (process) to trying to deter things from happening, but some of the things that happen in inspection is beyond our control. Certainly, with the LIS (Laser Inspection) station, you make it through the first time and might not make it through the second time and there’s really not good reason for it.”

Makar says the template station is another area that has been problematic for some teams, where different trips through can produce varying results.

“I’m not blaming NASCAR. I’m not blaming the teams. It is what it is. It’s hard to think you’re going to get penalties escalating because of that,” Makar said. “There are a lot of little things there that if wanted you could be penalized more than you probably deserve. It’s always nice to know what the rule is, what the penalty is and work from there.”

Dale Jr. admits getting a win this season "is going to be some work"