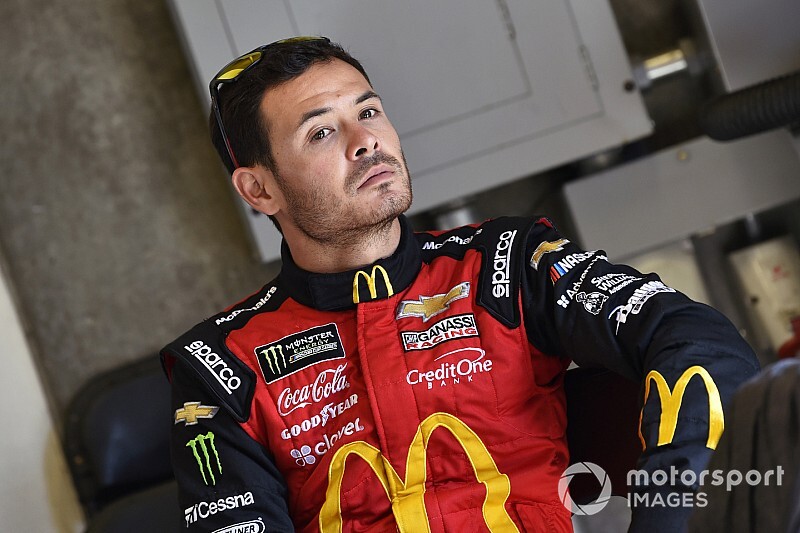 Both NASCAR and his Chip Ganassi Racing team have suspended Cup Series driver Kyle Larson for his use of a racial slur during the live-stream of a virtual race on Sunday evening.

Larson was competing in an iRacing event Sunday night, “Monza Madness,” featuring more than 60 entries and put together by fellow drivers Landon Cassill and Garrett Smithley, when he appeared to lose communication on his headset with his spotter during the pre-race practice session.

Larson was broadcasting his participation on his Twitch live stream and during a check of his microphone, he said, “You can't hear me?” That was followed by, “Hey …” and the N-word.

Those also on his channel chimed in, with “Wow” and “Kyle, you’re talking to everyone, bud,” “Yep, we heard that” and “Yikes.”

NASCAR will have Larson attend sensitivity training and said in a statement Monday: "NASCAR has made diversity and inclusion a priority and will not tolerate the type of language used by Kyle Larson during Sunday’s iRacing event. Our Member Conduct Guidelines are clear in this regard, and we will enforce these guidelines to maintain an inclusive environment for our entire industry and fan base."

Chip Ganassi Racing has also suspended Larson for the incident. "We are extremely disappointed by what Kyle said last night during an iRacing Event. The words that he chose to use are offensive and unacceptable. As of this moment we are suspending Kyle without pay while we work through this situation with all appropriate parties."

Larson has since posted a video apology for his use of the racial slur.

Additionally, both Credit One and McDonalds have terminated their sponsorship of Larson.

McDonalds released the following statement: "We were extremely disappointed and appalled to hear about this incident. The comments made by Kyle Larson are insensitive, offensive and not reflective of our inclusive values and will not be tolerated. McDonald's is taking immediate action to terminate the relationship with Larson."

AdventHealth released their own statement, support CGR's decision: "We're committed to a culture of inclusiveness and wholeness for our patients and team members, and Kyle Larson's use of racial slur is not reflective of that and unacceptable. As an ongoing partner with Chip Ganassi Racing, we support the decisive actions by them and NASCAR to suspend him."

Clover, the parent company of First Data, has since done the same. "We denounce the language used during Sunday’s iRacing event. We support the actions taken today by NASCAR and the Chip Ganassi Racing Team, and are terminating our sponsorship of Kyle Larson."

Fans participating in the broadcast chats spent most of the time during the race talking about Larson and once the event was over, social media was covered with clips of Larson’s words and comments – mostly negative – about his use of the racial epithet.

In 2013, NASCAR indefinitely suspended driver Jeremy Clements, who competes in what is now the Xfinity Series, for using a racial slur in an interview. He ended up missing two races and took part in diversity training before being reinstated.

Larson’s issue came one week after driver Bubba Wallace lost a sponsor for abruptly quitting an official NASCAR virtual racing event that was televised live nationally. He had been involved in three accidents in the first 12 laps of the 150-lap event and had already used up his two “resets.