J.J. Yeley will bring his strong record at New Hampshire Motor Speedway to Front Row Motorsports this weekend when he pilots the No. 38 Long John Silver's Ford. Travis Kvapil, the car's usual driver, will be racing in the Camping World Truck Series in Iowa. Sunday's Lenox Industrial Tools 301 will be Yeley's first time driving for Front Row Motorsports. 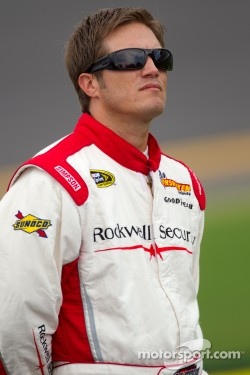 The 34-year-old Phoenix, Ariz., native has a strong resume at the flat track, with one top-five and three top-10 finishes in his Sprint Cup Series career. His best finish at the 1.058-mile oval is a third-place run in 2008.

The No. 38 Ford moved up one position in owners' points (37th) after Kvapil's 29th-place run at Kentucky Speedway last weekend. The team is still 16 points outside the top 35, so Yeley will need to qualify for the race on speed.

"Statistically, New Hampshire is actually my best track on the circuit. So, I'm sure that helped in Front Row's decision to put me in the car there. I know the No. 38 car has been close to getting back into the top 35 in owner points, and it seems like every time they get really close, they have some kind of setback. Hopefully we can have a good weekend and get those guys closer to getting back in.

"If someone hadn't told me a couple years ago that New Hampshire was statistically my best racetrack, I wouldn't have guessed that. It's a very technical racetrack, being a short track and being flat, so you've got to save your equipment and you've got to be there at the end. For some reason, it fits the way I like to drive. I'm constantly working on changing my line to help the racecar. I think you can find speed at a lot of different racetracks that way, and New Hampshire is one of them.

"I know a fair amount of the guys on the Front Row team, so it's not like working with strangers. I was at the shop Monday morning to get fitted in the car, and I saw a lot of faces from my days at Hall of Fame Racing and other guys that I've gotten to know over the years. I know Joe Williams is the new car chief on the 38, and I worked with him a little last year at Tommy Baldwin Racing. So, I do have relationships with some of the guys there, and it's always good to see old friends. I'm just excited about the opportunity to go run a full race in some pretty nice equipment. I know the Ford FR9 engines seem to have a pretty good advantage right now in the series, so I think it's going to be a lot of fun.

"It's never easy to just jump in with a new team, of course, but sometimes you run into those relationships where everything just clicks. (Crew chief) Jay Guy seems to be a really easy guy to work with, and I know he's going to start with a package that he's run at New Hampshire a couple different times and it's something that he's comfortable with, so I'm comfortable going into it. Obviously, we have to qualify in, so we'll make all qualifying runs on Friday. And because we're working with a standard race schedule this weekend, that still gives us plenty of time to work on the race trim on Saturday."

More from
Williams
Video Inside
Formula 1