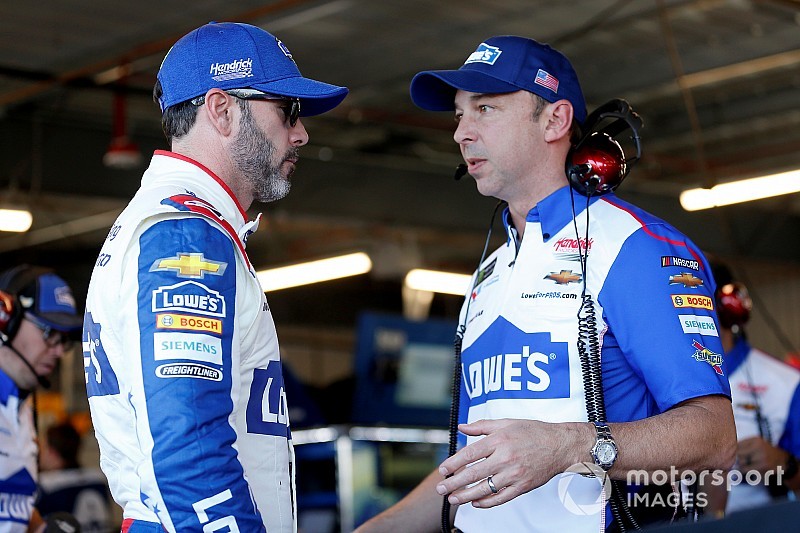 The final pairing of driver Jimmie Johnson and crew chief Chad Knaus ended not with a bang, but a whimper.

They debuted in the Monster Energy NASCAR Cup series together in 2002 and immediately won the pole for the season-opening Daytona 500. Nine races later, they had earned their first win.

Over the next 16 seasons they won a NASCAR record-tying seven Cup series titles, including five in a row at one point. Johnson’s victory in the spring Dover race last season was the 83rd of his career but he’s had none since.

Sunday’s Ford 400 at Homestead-Miami Speedway was the last for the driver/crew chief duo following a winless 2018 season. Johnson ended up 14th in the race but never led a lap.

They will go their separate ways next season – Knaus to crew chief up-and-comer William Byron and Johnson to be paired with Kevin Meendering – but also remain at their Hendrick Motorsports home.

Sunday’s race also marked the last for Lowe’s Home Improvement as Johnson’s sponsor. The company had been with him since his Cup series debut.

“It’s tough. When you think of the relationship with Lowe’s, I hate to see that come to an end,” Johnson said after the race. “Seventeen, 18 years really when you look at my first three races that I ran for them, everything we accomplished together, their belief in me and the company’s support of me and this team over the years.

“So that is one piece and then the other piece obviously with Chad, you know it’s time for us to move on and have a new project and have new people to work with. But he is my brother, there is just no way around it.

“So, it’s not an easy situation. It sure has not been easy, especially the second half of the year. We knew this was coming prior to the announcement, I should say, but the season is behind us now and I look forward to a good off season and get geared up for 2019.”

Johnson ended the 2018 season with no wins – the first time in his full-time career, a career-low two top-fives and tied a career-low with 11 top-10 finishes. He also failed to win a pole for just the third time in his career.

“In my Cup career that is probably the most difficult year that I have had. I can look back at some other years where I had different challenges of not having a sponsor or maybe not having a ride and dealing with adversity there,” Johnson said.

“As far as having a fully funded high-qualify ride, 2018 was by far the toughest. 2015 was pretty tough, but this was still tougher than that. Especially, to work through the decision to go separate ways with Chad.

“Early in the year, kind of mid-season when we made that decision and working through that scenario wasn’t easy. Just glad to finish with a respectable result today, but we’ve got a lot of work to do as a company.

Roger Penske on Joey Logano: "I think we've got an A+ guy"

Joey Logano returned to his roots and emerged a NASCAR champion