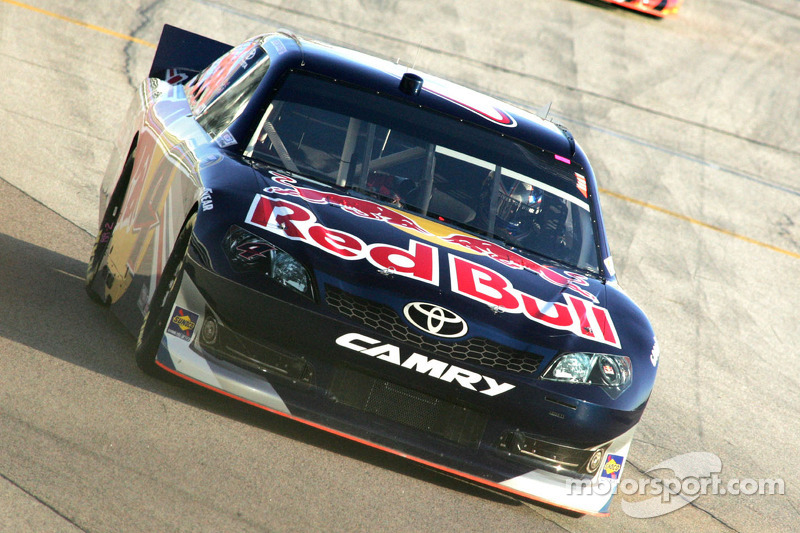 Kasey Kahne kept his No. 4 Red Bull Racing Toyota in front of the No. 99 Roush Fenway Racing Ford of Carl Edwards in the closing laps of the Kobalt Tools 500 NASCAR Sprint Cup Series race at Phoenix International Raceway on Sunday. The victory marked the first win for Kahne since September 2009 and the 11th victory for the driver-crew chief duo of Kahne and Kenny Francis.

It's been a long time coming. It was a great run today.

It feels so good,” Kahne said. “It’s been a long time coming. It was a great run today.”

The win felt so good to Frances that he referred to it as “the biggest win for me, ever.”

Chase for the Sprint Cup championship contenders Edwards and Tony Stewart, driver of the No. 14 Stewart-Haas Racing Chevrolet, raced to a draw as far as the title is concerned. Edwards finished second to Stewart’s third, but Stewart’s bonus point for leading the most laps (160 in the 312-lap event) cancelled out Edwards’ extra point for finishing one position better. Each driver earned a bonus point for leading at least one lap.

“We finished in front of Tony,” No. 99 crew chief Bob Osborne said. “We would have liked to increase the points lead, but we didn’t because he was able to lead so many laps early on. We had a great car, and they had a great day too. It is going to be exciting going into Homestead.”

Edwards holds a three point lead over Stewart heading into next Sunday’s season-finale at Homestead-Miami Speedway. All other Chase drivers have been mathematically eliminated from championship contention.

“We have never gone into Homestead with the points lead,” Edwards said. “You know, they give a boat away if you win that thing. I saw that boat, and I would like to go down there and win it. That would be fun to put a cap on this season. That is what our mission is. We feel we have the cars and pit crew and have shown that we can gut it out on these really touchy days when maybe we don’t have the fastest car.”

The only other Chase driver to finish in the top-10 was Stewart’s SHR teammate, Ryan Newman in the No. 39 Chevrolet. Newman finished fifth.

Stewart and Edwards started the race in close proximity, with Stewart starting eight and Edwards ninth. Stewart, though, quickly made his way to the front and took the lead from pole sitter Matt Kenseth in the No. 17 Roush Fenway Racing Ford on lap 36. 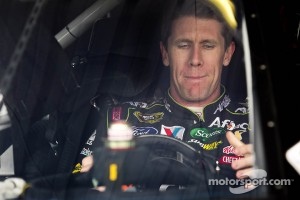 Edwards, meanwhile, continued to run in the back half of the top-10 until he gained several spots on pit road during a NASCAR competition caution on lap 40. Edwards restarted the race in third, and he and Stewart ran among the top-three for much of the remainder of the race.

Kenseth also ran near the front with Edwards and Stewart, usually taking the lead from Stewart on pit road, only to lose it soon after on the racetrack. Kenseth fell out of contention for the race win as a result of contact from the No. 83 Red Bull Racing Toyota driven by Brian Vickers that was assumed to be retaliation for an incident between the two at Martinsville Speedway a couple of races ago.

“Obviously, it is retaliation for retaliation, I guess,” Kenseth said. “I was out of brakes, and I was up on everybody and I saw him coming and I lifted at least 10 car-lengths before where I would normally lift and he drove in there at 165 mph and cleaned us out.”

Edwards and Stewart lost positions because of pit strategy during a caution with 94 laps to go when Kurt Busch in the No. 22 Penske Racing Dodge and Paul Menard in the No. 27 Richard Childress Racing Chevrolet took only two tires as everyone else took four. Stewart and Edwards restarted third and fourth.

Menard fell back several positions right after the restart, but Busch stayed up front until he ran out of fuel with 33 laps remaining. Edwards then assumed the lead, but Stewart ended up in third behind Kahne, who had made his way up to second by that point.

Kahne took the top spot from Edwards during a cycle of green flag pit stops in the final 30 laps. Stewart came out of the cycle in fourth but was able to get by the No. 31 Richard Childress Racing Chevrolet in the closing laps for the third spot. 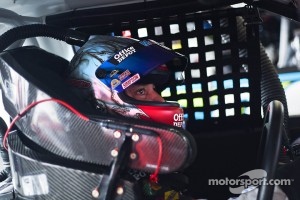 “I over-drove it in two corners before that (getting by Burton), but it just looked like he got a little tight, and I was able to get rotated in the center and get underneath him,” Stewart said. “But I don’t think he pushed the issue really hard. I think he raced us with respect there and so I appreciate that.”