Kyle Busch to fans: "I don't know what you all are whining about" 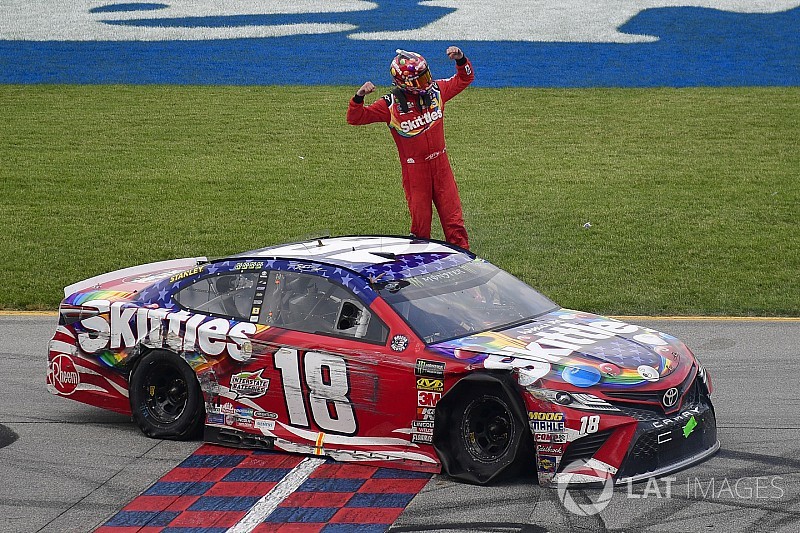 Kyle Busch took the win at Chicagoland Speedway after sparks flew on the final lap between he and Kyle Larson.

After contact between the two drivers out of Turn 2, Busch put the bumper to Larson in the final corner, sending Larson spinning as the No. 18 bounced off the outside wall.

But when the smoke cleared, it was Busch claiming the checkered flag for his fifth win of the season and 48th of his Cup career.

"I got really boxed in behind lapped cars and got really slow and was just trying to get all I could there the last couple laps," Busch told NBCSN.

"Larson tried to pull a slider and didn't quite complete it, slid up into me, used me and I kind of used him as a little bit of a brake getting into three and I was able to come back for the victory."

He later added, "When you start banging doors on one another, that's what it turns the race into and it's fair game after that so if he had raced fair game off of two and not banged doors, then we would have been just fine in turn three but it's the way it goes sometimes."

Busch then turned his attention to the grandstands, which was a mix of both cheers and boos after that thrilling, but controversial last lap.

"If it wasn't for lapped traffic, it wouldn't even have been a race, so I don't know what you all are whining about. But if you don't like that kind of racing, don't even watch."

"Pretty cool going to Victory Lane," he said at the conclusion of the interview before blowing the fans a kiss and driving his battered race car to Victory Lane.

Kyle Busch and Larson collide in spectacular finish at Chicagoland