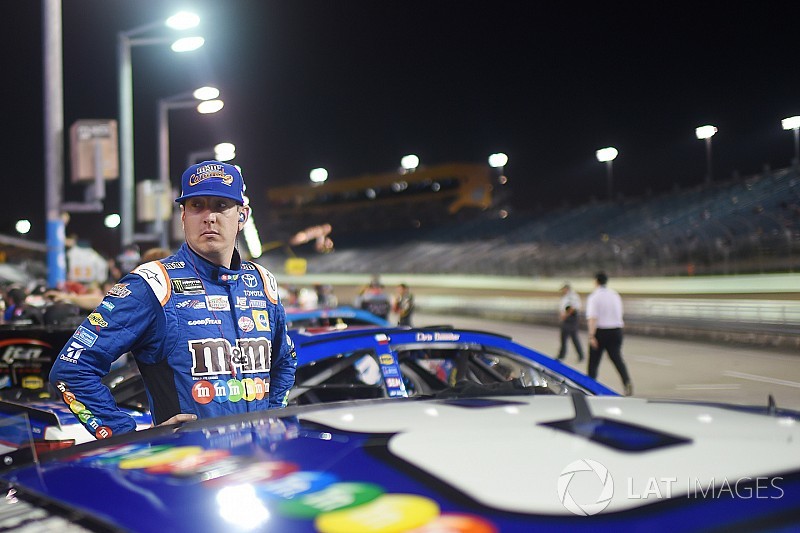 On Sunday, the driver of the No. 18 M&Ms Toyota was hit with a double whammy when he lost both the race and the title to Martin Truex Jr., at Homestead-Miami Speedway.

“It wasn't quite what we wanted there at the end,” Busch said. “I thought we had a really great race car, especially on the long runs we were really, really good. Just came down to there at the end not having enough tire when I got to the 78 (Truex), so I just overused my stuff, and I knew I overused my stuff when I was running with the 22 (Joey Logano) trying to get by him and just overworked everything and got to the 4 (Kevin Harvick), got by him pretty quick.

“I tried to make sure that I could do that pretty quick so then I could have at least a little more tire life, but didn't seem to pay me off any when I got to the 78.

When asked by NBC where the title was truly lost, he went back to Logano. "Battling with the No. 22 there. Just wasting too much time with him. He held me up. He was there blocking every single chance he got, so got a real buddy there."

Busch was better on long runs, particularly as the track cooled down. A late race caution, triggered by his brother Kurt spinning off of Turn 3 brought the field to pit road with 36 laps remaining in the race. Busch entered pit road fourth and restarted third with 34 laps to go. He was quickly shuffled to fifth on the first lap, but battled Logano to regain position and set his sights on Truex as the laps wound down.

Busch led 43 laps but couldn’t catch Truex after contact from Larson behind.

“We gave it all we had, we gave it our all,” Busch said. “They deserved it—probably like any other race—but today, I though we were better. Doesn’t matter, they were out front when it mattered most. It’s just unfortunate for us that the caution came out and ruined our race strategy and we couldn’t get back to where we needed to be. Then I had to fight too hard with those other guys, but that’s just racing. It happens.

“I feel really bad we come up a spot short, given I thought we had the best car today, and I guess that's why it's called racing, and you've got to run it out.”